Hydrologic soil groups play an important role in the determination of surface runoff, which, in turn, is crucial for soil and water conservation efforts. Traditionally, placement of soil into appropriate hydrologic groups is based on the judgement of soil scientists, primarily relying on their interpretation of guidelines published by regional or national agencies. As a result, large-scale mapping of hydrologic soil groups results in widespread inconsistencies and inaccuracies. This paper presents an application of machine learning for classification of soil into hydrologic groups. Based on features such as percentages of sand, silt and clay, and the value of saturated hydraulic conductivity, machine learning models were trained to classify soil into four hydrologic groups. The results of the classification obtained using algorithms such as k-Nearest Neighbors, Support Vector Machine with Gaussian Kernel, Decision Trees, Classification Bagged Ensembles and TreeBagger (Random Forest) were compared to those obtained using estimation based on soil texture. The performance of these models was compared and evaluated using per-class metrics and micro- and macro-averages. Overall, performance metrics related to kNN, Decision Tree and TreeBagger exceeded those for SVM-Gaussian Kernel and Classification Bagged Ensemble. Among the four hydrologic groups, it was noticed that group B had the highest rate of false positives. View Full-Text
Keywords: multi-class classification; soil texture calculator; k-Nearest Neighbors; support vector machines; decision trees; ensemble learning multi-class classification; soil texture calculator; k-Nearest Neighbors; support vector machines; decision trees; ensemble learning
►▼ Show Figures 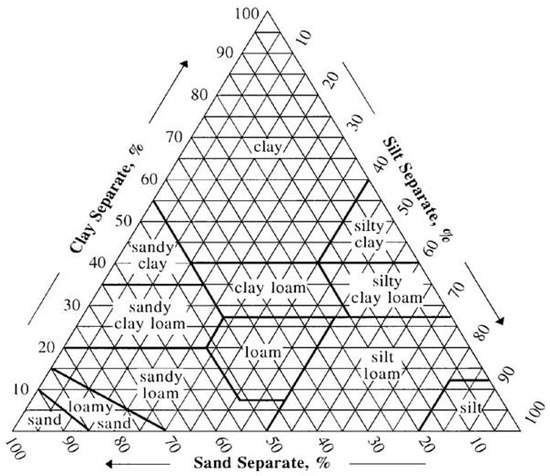