Traditional Filuferru is an ancient spirit from Sardinia, Italy, which is usually obtained from the distillation of wine or grape marc. In this contribution, the results of the first chemical characterization of a wide number of crafts Filuferru samples has been accomplished in terms of an evaluation of the alcoholic strength, qualitative and quantitative gas-chromatography–mass spectrometry (GC-MS) analysis of the volatile composition of the distillate, and its trace element composition by means an inductively coupled plasma–mass spectrometry (ICP-MS) method. Both instrumental methods have been validated and applied on 21 craft samples of Filuferru, whereas one sample of commercial distillate has been analyzed for comparison purposes. Alcoholic strength ranged between 41.0 and 62.4% (v/v). Sixty volatile compounds were identified and ten of them have been quantified. Analogies and differences with Grappa (i.e., the Italian distilled spirit closer to Filuferru) have been highlighted in the qualitative and quantitative profile of this matrix. Often meaningful amounts of acetaldehyde, ethyl acetate, dietyl acetal, and acetic acid were measured. Elemental analysis, performed on toxic, non-toxic elements, and oligoelements, 18 in total, revealed a wide variability of concentrations in both analytes and samples. High concentrations of Cu are sometimes evidenced, which are likely caused by losses from the distillation apparatus. The principal components analysis (PCA) allowed the differentiation of the ten volatile compounds quantified in two groups: the former, as described mainly by PC1, constituted by acetic acid, ethyl acetate, dietyl acetal, and acetaldehyde, and the second, described by PC2, constituted by 1-propanol, 2-methyl-1-propanol, the two coeluiting isomers 2-methyl-1-butanol and 3-methyl-1-butanol,1-hexanol, 2-phenylethanol, and 2,3-butanediol. Data obtained may be useful in order to establish a regulation for the production of high-quality traditional Filuferru from Sardinia. View Full-Text
Keywords: Filuferru; spirit; distillation; grape marc; volatile compounds; copper; trace elements; GC-MS; ICP-MS; PCA Filuferru; spirit; distillation; grape marc; volatile compounds; copper; trace elements; GC-MS; ICP-MS; PCA
►▼ Show Figures 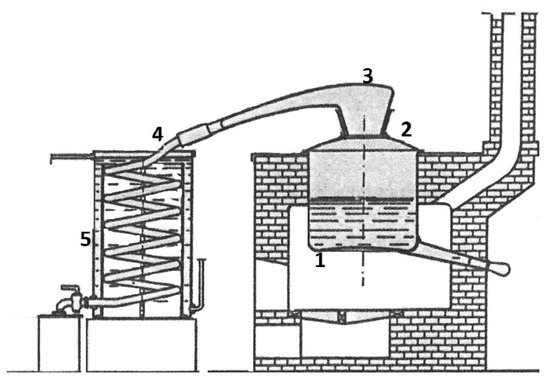