Background: Cordyceps militaris is a medicinal mushroom and has been extensively used as a folk medicine in East Asia. In this study, the separation of constituents involved in xanthine oxidase (XO) inhibitory, antioxidant and antibacterial properties of C. militaris was conducted. Methods: The aqueous residue of this fungus was extracted by methanol and then subsequently fractionated by hexane, chloroform, ethyl acetate and water. The ethyl acetate extract possessed the highest XO inhibitory and antioxidant activities was separated to different fractions by column chromatography. Each fraction was then subjected to anti-hyperuricemia, antioxidant and antibacterial assays. Results: The results showed that the CM8 fraction exhibited the strongest XO inhibitory activity (the lowest IC50: 62.82 μg/mL), followed by the CM10 (IC50: 68.04 μg/mL) and the CM7 (IC50: 86.78 μg/mL). The level of XO inhibition was proportional to antioxidant activity. In antibacterial assay, the CM9 and CM11 fractions showed effective antibacterial activity (MIC values: 15–25 mg/mL and 10–25 mg/mL, respectively). Results from gas chromatography-mass spectrometry (GC-MS) analyses indicated that cordycepin was the major constituent in the CM8 and CM10 fractions. Conclusions: This study revealed that C. militaris was beneficial for treatment hyperuricemia although in vivo trials on compounds purified from this medicinal fungus are needed. View Full-Text
Keywords: Cordyceps militaris; xanthine oxidase; antioxidant; antibacterial; cordycepin; GC-MS Cordyceps militaris; xanthine oxidase; antioxidant; antibacterial; cordycepin; GC-MS
►▼ Show Figures 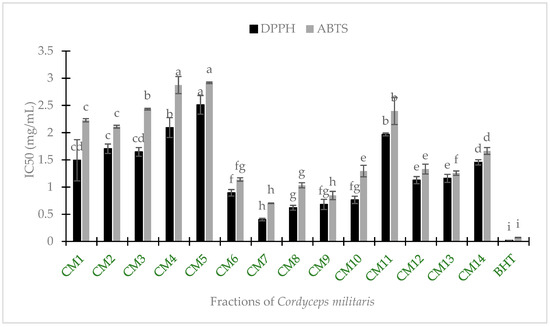