Heavy Metals in the Fish Tenualosa ilisha Hamilton, 1822 in the Padma–Meghna River Confluence: Potential Risks to Public Health
Next Article in Special Issue

Determination of Median Lethal Concentration (LC50) for Endosulfan, Heptachlor and Dieldrin Pesticides to African Catfish, Clarias gariepinus and Their Impact on Its Behavioral Patterns and Histopathological Responses

Pesticides such as endosulfan, heptachlor and dieldrin persist in aquatic environments as a result of their resistance to biodegradation. However, there is no adequate information about the toxicity of endosulfan, heptachlor and dieldrin to the aquatic organism, African catfish (Clarias gariepinus)—a high valued widely distributed commercially interesting species. The current experiment was performed with the aim to determine the median lethal concentration (LC50) of endosulfan, heptachlor and dieldrin to African catfish (Clarias gariepinus); their behavioral abnormalities and histopathological alterations in several vital organs. A total of 324 juvenile fish were exposed for 96 h to six concentrations of endosulfan and dieldrin at 0, 0.001, 0.002, 0.004, 0.008 and 0.016 ppm, and to heptachlor at concentrations of 0, 0.02, 0.04, 0.08, 0.16 and 0.32 ppm for dose-response tests. The study demonstrated that the species is highly susceptible to those contaminants showing a number of behavioral abnormalities and histopathological changes in gill, liver and muscle. The 96-h LC50 value of endosulfan, dieldrin and heptachlor for the African catfish was found as 0.004 (0.001−0.01) mg/L, 0.006 mg/L and 0.056 (0.006−0.144) mg/L, respectively. Abnormal behaviors such as erratic jerky swimming, frequent surfacing movement with gulping of air, secretion of mucus on the body and gills were observed in response to the increasing exposure concentrations. Histopathological alterations of liver, gill and muscle tissues were demonstrated as vacuolization in hepatocytes, congestion of red blood cells (RBCs) in hepatic portal vein; deformed secondary lamellae and disintegrated myotomes with disintegrated epidermis, respectively. These findings are important to monitor and responsibly manage pesticide use in and around C. gariepinus aquacultural areas. View Full-Text
Keywords: heptachlor; endosulfan; dieldrin; LC50; behavioral stresses; histopathological responses; African catfish (Clarias gariepinus) heptachlor; endosulfan; dieldrin; LC50; behavioral stresses; histopathological responses; African catfish (Clarias gariepinus)
►▼ Show Figures 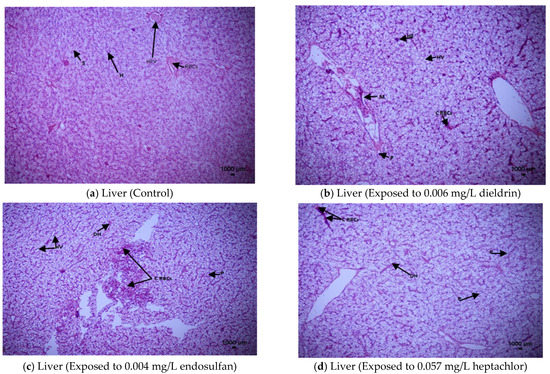 S. M. Nurul Amin
S M Nurul Amin was awarded Doctor of Philosophy in 2008 by Universiti Putra Malaysia (UPM), Selangor, Malaysia. His current position is an Associate Professor with Department of Aquaculture, Faculty of Agriculture, UPM. Also he has been selected as Guest Editor of Journal of Environmental Biology for special issue for 2020

Christopher L. Brown
He is working as a Professor at Department of Aquaculture, FAO World Fisheries University, Busan 48547, South Korea. He is doing research on Fisheries science.

Md. Kamal Uddin
Md Kamal Uddin obtained his B. Sc. Degree in Agricultural Science and MS in Soil Science from Bangladesh Agricultural University, Bangladesh and PhD degree (2010) in the field of Agronomy from Universiti Putra Malaysia, Malaysia. He has 17 years of teaching and research experience. He was a Post-Doctoral Fellow and Research Fellow at the Institute of Tropical Agriculture, Universiti Putra Malaysia, Malaysia from 2011 to 2013. His research field is Soil Fertility and Plant Nutrition. Currently, his h-index is 16. He has published 80 journal papers, 4 books and 6 book chapters. He has published some publications in Q1 and Q2 journals. He was awarded silver and bronze medal for the research paper competition at UPM in 2010 and 2011. Currently, he is promoted as an Associate Professor in Department of Land Management, Faculty of Agriculture, Universiti Putra Malaysia.

Aziz Arshad
https://agri.upm.edu.my/department/department_of_aquaculture/directory_of_academic_staff-163
Zoom | Orient | As Lines | As Sticks | As Cartoon | As Surface | Previous Scene | Next Scene
We use cookies on our website to ensure you get the best experience. Read more about our cookies here.
Accept
We have just recently launched a new version of our website. Help us to further improve by taking part in this short 5 minute survey here. here.
Never show this again