‘The Plastic Nile’: First Evidence of Microplastic Contamination in Fish from the Nile River (Cairo, Egypt)

Occurrence of Microplastic Pollution at Oyster Reefs and Other Coastal Sites in the Mississippi Sound, USA: Impacts of Freshwater Inflows from Flooding

Much of the seafood that humans consume comes from estuaries and coastal areas where microplastics (MPs) accumulate, due in part to continual input and degradation of plastic litter from rivers and runoff. As filter feeders, oysters (Crassostrea virginica) are especially vulnerable to MP pollution. In this study, we assessed MP pollution in water at oyster reefs along the Mississippi Gulf Coast when: (1) historic flooding of the Mississippi River caused the Bonnet Carré Spillway to remain open for a record period of time causing major freshwater intrusion to the area and deleterious impacts on the species and (2) the spillway was closed, and normal salinity conditions resumed. Microplastics (~25 µm–5 mm) were isolated using a single-pot method, preparing samples in the same vessel (Mason jars) used for their collection right up until the MPs were transferred onto filters for analyses. The MPs were quantified using Nile Red fluorescence detection and identified using laser direct infrared (LDIR) analysis. Concentrations ranged from ~12 to 381 particles/L and tended to decrease at sites impacted by major freshwater intrusion. With the spillway open, average MP concentrations were positively correlated with salinity (r = 0.87, p = 0.05) for sites with three or more samples examined. However, the dilution effect on MP abundances was temporary, and oyster yields suffered from the extended periods of lower salinity. There were no significant changes in the relative distribution of MPs during freshwater intrusions; most of the MPs (>50%) were in the lower size fraction (~25–90 µm) and consisted mostly of fragments (~84%), followed by fibers (~11%) and beads (~5%). The most prevalent plastic was polyester, followed by acrylates/polyurethanes, polyamide, polypropylene, polyethylene, and polyacetal. Overall, this work provides much-needed empirical data on the abundances, morphologies, and types of MPs that oysters are exposed to in the Mississippi Sound, although how much of these MPs are ingested and their impacts on the organisms deserves further scrutiny. This paper is believed to be the first major application of LDIR to the analysis of MPs in natural waters. View Full-Text
Keywords: plastic pollution; oysters; Mississippi Sound; fluorescence microscopy; laser direct infrared analysis; LDIR; bulk water sampling; Bonnet Carré Spillway plastic pollution; oysters; Mississippi Sound; fluorescence microscopy; laser direct infrared analysis; LDIR; bulk water sampling; Bonnet Carré Spillway
►▼ Show Figures 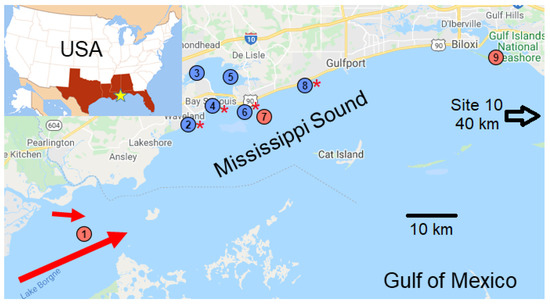