Food-Based Dietary Guidelines for Seafood Do Not Translate into Increased Long-Chain Omega-3 Levels in the Diet for U.S. Consumers
Next Article in Special Issue

Insects are suggested as a sustainable protein source of high nutritional quality, but the effects of insect ingestion on processes in the gastrointestinal tract and gut microbiota (GM) remain to be established. We examined the effects of partial substitution of meat with insect protein (Alphitobius diaperinus) in a four-week dietary intervention in a healthy rat model (n = 30). GM composition was characterized using’ 16S rRNA gene amplicon profiling while the metabolomes of stomach, small intestine, and colon content, feces and blood were investigated by 1H-NMR spectroscopy. Metabolomics analyses revealed a larger escape of protein residues into the colon and a different microbial metabolization pattern of aromatic amino acids when partly substituting pork with insect. Both for rats fed a pork diet and rats fed a diet with partial replacement of pork with insect, the GM was dominated by Lactobacillus, Clostridium cluster XI and Akkermansia. However, Bray-Curtis dissimilarity metrics were different when insects were included in the diet. Introduction of insects in a common Western omnivore diet alters the gut microbiome diversity with consequences for endogenous metabolism. This finding highlights the importance of assessing gastrointestinal tract effects when evaluating new protein sources as meat replacements. View Full-Text
Keywords: NMR-based metabolomics; microbiota; insect protein; protein digestion; alternative proteins NMR-based metabolomics; microbiota; insect protein; protein digestion; alternative proteins
►▼ Show Figures 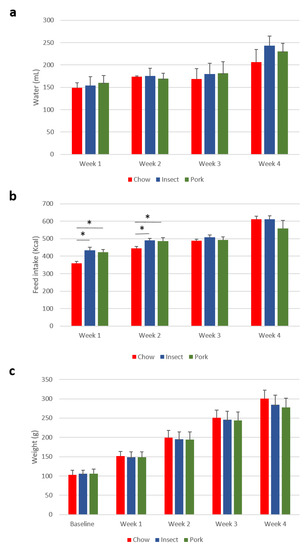