A Full Diagnostic Process for the Orthodontic Treatment Strategy: A Documented Case Report

:
This study aimed to examine the spatial cleaning effect of ultrasonic irrigation in simulated root canal with oblong cross section in the absence of antimicrobial agent. A 7-day E. faecalis biofilm was cultivated in a rectangular, simulated canal model and subjected to passive ultrasonic irrigation (PUI) with sterile saline for 5 minutes. After that, the biofilm was examined by confocal microscopy after bacterial viability staining at 58 sites around and beyond the endosonic file. Results showed that, at the vicinity of the file, the amount of viable bacteria ranged from 13.1% (2.75 mm from the tip) to 40.5% (4.5 mm level). Lesser amounts of live bacteria were observed within 1 mm from the vibrating file, which amount increased for sites farther away. At 3 mm distance, the amount of bacteria (35.5 to 64.4%) was significantly greater than areas situated close to the vibrating file (P < 0.01). Sites next to the anti-nodes of file had less bacteria remaining than sites near the nodes (P = 0.050). Apically (0.5 mm or more), the amount of bacteria was significantly greater than that at the file tip (16.4%) (P < 0.05). It was concluded that PUI is able to dislodge a single-species biofilm, provided that they are situated in close vicinity to the vibrating file.
Keywords:
activated irrigation; ultrasonic; spatial effect; biofilm; endodontic treatment; root canal

An important aim of endodontic treatment is to rid the root canal system from infectious agents. A clinical cohort study has clearly demonstrated the significant role of (cultivable) bacteria present within the root canal before obturation in lowering the chance of success for root canal treatment [1]. A strong association has been found between the presence of intracanal infection and non-healing apical periodontitis after endodontic treatment [2,3,4].
Microorganisms found in infected teeth associated with periapical lesions were shown to organize themselves in a biofilm architecture attaching to the root canal wall [2,5]. Sjögren et al. [1] commented that bacteria are often present in areas of the root canal that cannot be reached by chemo-mechanical debridement. It was alarming that, even with the use of operating microscope and contemporary root canal preparation techniques, microorganisms could still be isolated in 88% of mandibular molar roots after non-surgical endodontic treatment [6]. Indeed, most bacteria were found in recessed areas and diverticula of the root canal system [6], which could become microbial niches that lead to the development of (refractory) apical periodontitis. It has been commented that eradication of all bacteria from the complex root canal system is close to impossible [2].
Many instruments or instrumentation techniques have been proposed for root canal preparation, with some notable advancement in the past two decades. The introduction of nickel-titanium (NiTi) rotary instruments has helped to produce a predictable shape to the root canal [7,8], reduce the amount of preparation errors and increase the rate of successful treatment [9]. Rotary instruments tend to produce round preparations (in cross section) [10,11]. However, root canals seldom are round in cross section before treatment, especially in their middle and coronal two-thirds [12]. The final preparation is either situated in the centre or at one side of root canals with oblong cross section [11,13,14], leaving variable amounts of un-instrumented root canal wall and (probably infected) debris in recessed areas [12,15,16].
Ultrasonic irrigation has been shown to be significantly more effective than needle-and-syringe irrigation in dislodging debris and smear layer [17,18,19,20,21] and, possibly, biofilm [22]. The ultrasonically-activated endodontic file, also known as endosonic file, can also prepare the canal wall due to its dentine cutting ability. However, when the endosonic file is intentionally brought into contact with the canal wall for purpose of ultrasonic cutting of dentine, the cleaning efficacy is reduced in comparison with those endosonic files that are used in a non-cutting manner [23]. This mode of usage, that is, agitation of the root canal irrigant without simultaneous instrumentation is known as Passive Ultrasonic Irrigation (PUI) [24]. Upon activation, the endosonic file vibrates in a sinusoidal waveform, with the tip being one of the places along the file that show the greatest amplitude of movement [25]. There are sites along the vibrating file that look stationary; these locations are called the nodes. Those sites showing the greatest vibration amplitude are called anti-nodes [25]. That waveform and amplitude of vibration might be altered, if there should be any contact between the file and the canal wall [26]. A recent systematic review [27] has indicated that the use of ultrasonic irrigation in conjunction with antiseptic agents yielded conflicting results from in vitro microbiological studies, although it generally would be more effective than needle-and-syringe irrigation in removing soft and hard tissue debris. All studies either examined the cleaning and disinfection effect of the ultrasonically activated irrigant [27], or looked into the file oscillation and/or flow of irrigant inside the canal [25,28,29,30]. Little information about the spatial cleaning ability due to the mechanical action or the biophysical effect of the endosonic file, especially in relation to those file locations with different vibration amplitudes. Thus, the aim of this study was to examine the spatial effect of ultrasonic irrigation on a mono-species biofilm in a simulated root canal model with an oblong cross section, correlated to the location of the nodes and anti-nodes along the endosonic file. The null hypothesis was that there is no difference in the cleaning effect of passive ultrasonic irrigation at various locations of the root canal.

None of the ultrasonic files fractured after 5 min of unconstrained vibration while immersed in the irrigant solution, i.e., the passive ultrasonic irrigation (PUI) regime, inside the simulated canal model. Virtually no dead bacterial cells (stained red) could be identified; microorganisms remaining on the polystyrene plates were stained green i.e., viable (Figure 4). Minimal amount of area covered with viable bacteria was noted for the negative control (without biofilm cultivated), confirming sterility control of the setup.
For the experimental group, the lowest number of viable bacteria was generally observed over the reference line (the y-axis in Figure 3) where it was closest to the vibrating file, with the amount ranging from 13.1% (at the 2.75 mm-level coronal to file tip) to 40.5% (4.5 mm-level) (Figure 5). Relatively low amounts of viable bacteria were observed up to 1 mm away from the file (along y-axis), before the amount began to rise for sites farther away from the file. At 3 mm away, some 35.5 to 64.4% of the sampled area remained covered with viable bacteria, which value was significantly greater than that on the reference line (i.e., the y-axis where the file was aligned) or at 0.5 mm from the file (P < 0.01). Sites at the same level as the location an anti-node tended to be cleaner, compared with those corresponding sites at the level of a node. A significant difference in the amount of remaining bacteria was detected collectively between the level of nodes versus anti-nodes along the reference line (P = 0.050) along the file (Figure 5).
Apical to the vibrating file, the amount of bacteria was more than double at 0.5 mm away (38.2%) than that at the file tip (16.4%) (P < 0.05). Farther away, the value increased but tended to level off at about 45% (Figure 6). No significant difference was found between sites 0.5 mm and those that were farther away from the endosonic file tip (P > 0.05).

Passive ultrasonic irrigation, without any disinfecting agent, is able to remove a single-species E. faecalis biofilm only at sites that are situated in close vicinity of the endosonic file. The mechanical cleaning effect is neither uniform across the surface, nor along the length of the vibrating file. The ability of ultrasonic agitation to dislodge the bacterial biofilm beyond the tip of the endosonic file is limited. While ultrasonic activation of disinfectant solution is often practiced in clinical endodontic treatment, it is advisable not to hold the endosonic file stationary in one single position. 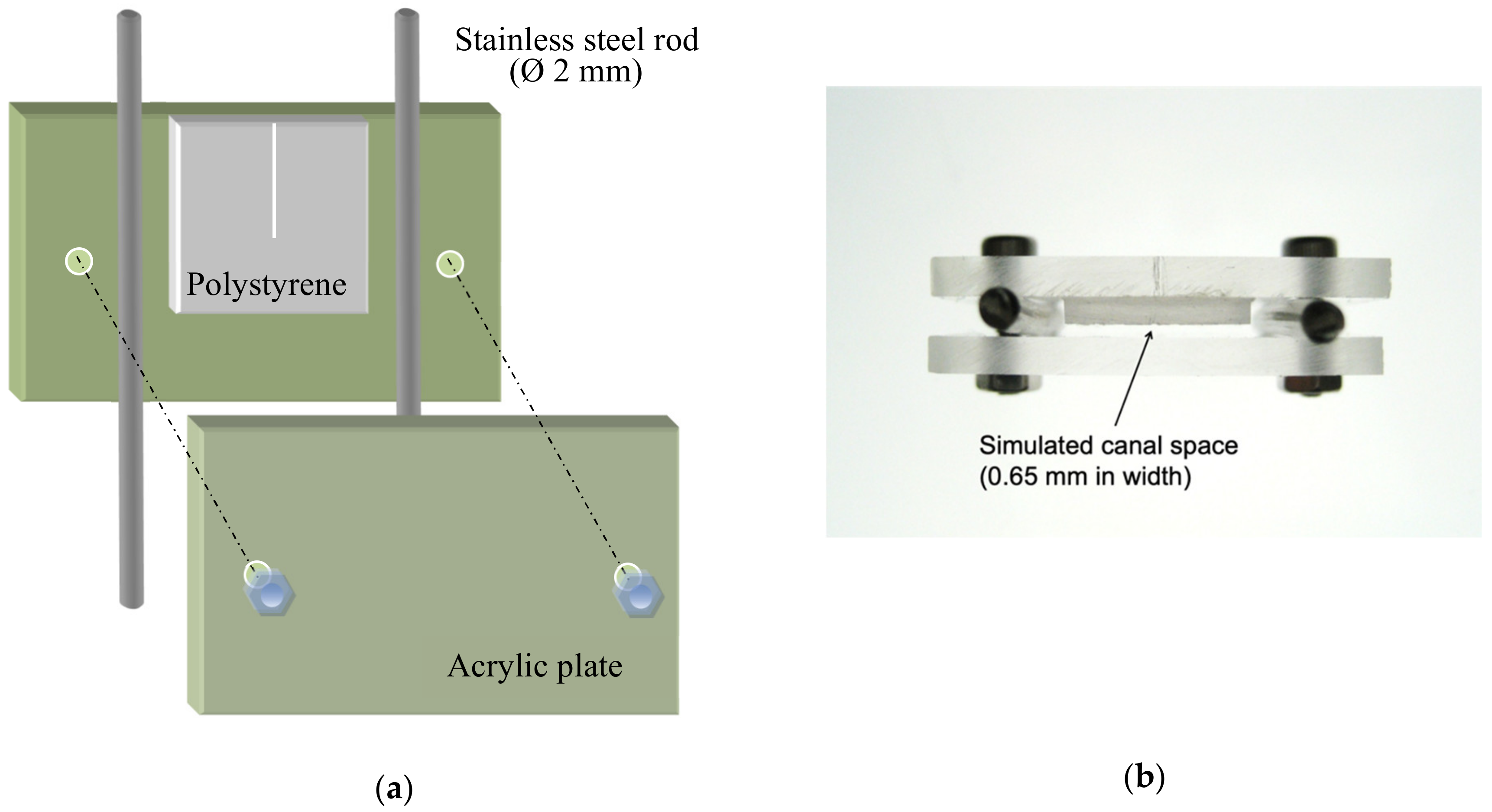 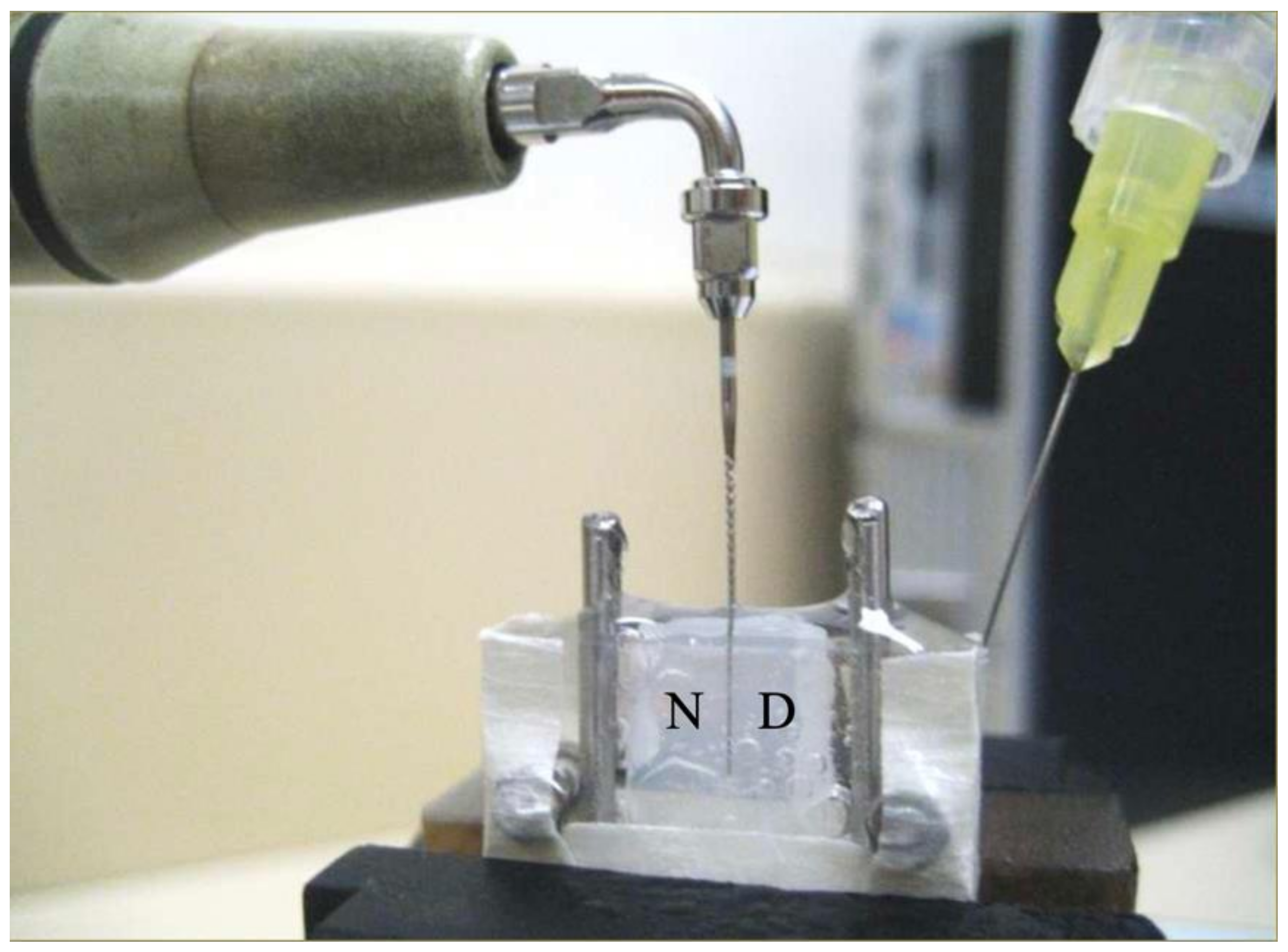