Adsorption and Separation of the H2O/H2SO4 and H2O/C2H5OH Mixtures: A Simulated and Experimental Study

Adsorption processes are characterized by their kinetics and equilibrium isotherms described by mathematical models. Nowadays, adsorption with molecular sieves is a method used to separate certain elements or molecules from a mixture and produce hydrogen, nitrogen, oxygen, ethanol, or water treatment. This study had two main objectives. The first one was focused on the use of different natural (Clinoptilolite-S.L. Potosi, Clinoptilolite-Puebla, and Heulandite-Sonora) and synthetic (Zeolite Type 3A) adsorbents to separate the mixtures and . It was determined that both Zeolite Type-3A and Heulandite-Sonora have greater adsorption capacity in a shorter time compared with the Clinoptilolites at different temperatures. The second objective was the simulation of a pressure swing adsorption process to dehydrate ethanol using the parameters obtained from Zeolite Type 3A (with maximum adsorption capacity). Several configurations were considered to calculate the appropriate nominal values for the optimal process. The results illustrate that the purity of ethanol is increased when the following parameters are considered in the adsorption process: a high pressure, a constant temperature between 100 and 120 C, a feed composition near the azeotropic point with lower water content, and a purge pressure near the vacuum. Finally, the results show that it is possible to take advantage of the length of the absorber bed in order to reduce the energy costs by increasing the ethanol production as well as complying with the international purity standards. View Full-Text
Keywords: natural and synthetic zeolites; heat and chemical treatment; pressure swing adsorption process natural and synthetic zeolites; heat and chemical treatment; pressure swing adsorption process
►▼ Show Figures 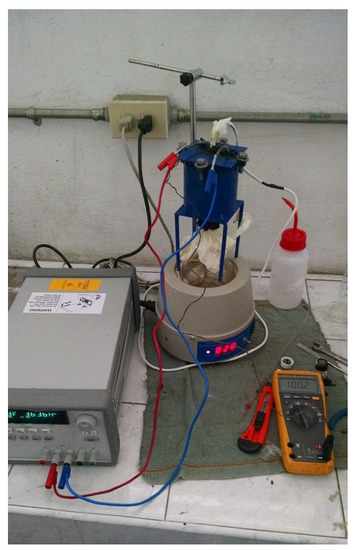