Supercritical CO2 Transesterification of Triolein to Methyl-Oleate in a Batch Reactor: Experimental and Simulation Results
Previous Article in Journal

The penetration of renewable power generation is increasing at an unprecedented pace. While the operating greenhouse gas (GHG) emissions of photovoltaic (PV) and wind power are negligible, their upstream emissions are not. The great challenge with the deployment of renewable power generators is their intermittent and variable nature. Current electric power systems balance these fluctuations primarily using natural gas fired power plants. Alternatively, these dynamics could be handled by the integration of energy storage technologies to store energy during renewable energy availability and discharge when needed. In this paper, we present a model for estimating emissions from integrated power generation and energy storage. The model applies to emissions of all pollutants, including greenhouse gases (GHGs), and to all storage technologies, including pumped hydroelectric and electrochemical storage. As a case study, the model is used to estimate the GHG emissions of electricity from systems that couple photovoltaic and wind generation with lithium-ion batteries (LBs) and vanadium redox flow batteries (VFBs). To facilitate the case study, we conducted a life cycle assessment (LCA) of photovoltaic (PV) power, as well as a synthesis of existing wind power LCAs. The PV LCA is also used to estimate the emissions impact of a common PV practice that has not been comprehensively analyzed by LCA—solar tracking. The case study of renewables and battery storage indicates that PV and wind power remain much less carbon intensive than fossil-based generation, even when coupled with large amounts of LBs or VFBs. Even the most carbon intensive renewable power analyzed still emits only ~25% of the GHGs of the least carbon intensive mainstream fossil power. Lastly, we find that the pathway to minimize the GHG emissions of power from a coupled system depends upon the generator. Given low-emission generation (<50 gCO2e/kWh), the minimizing pathway is the storage technology with lowest production emissions (VFBs over LBs for our case study). Given high-emission generation (>200 gCO2e/kWh), the minimizing pathway is the storage technology with highest round-trip efficiency (LBs over VFBs). View Full-Text
Keywords: solar PV; wind power; life cycle analysis; energy storage solar PV; wind power; life cycle analysis; energy storage
►▼ Show Figures 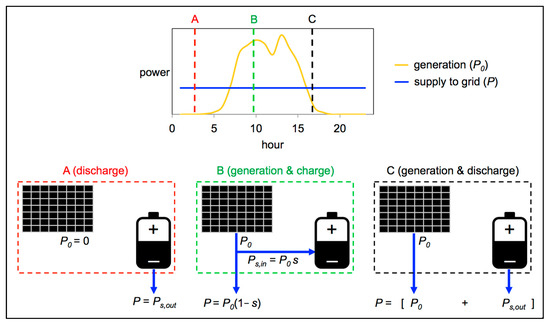