This paper discusses wind tunnel test results aimed at advancing active flow control technology to increase the aerodynamic efficiency of an aircraft during take-off. A model of the outer section of a representative civil airliner wing was equipped with two-stage fluidic actuators between the slat edge and wing tip, where mechanical high-lift devices fail to integrate. The experiments were conducted at a nominal take-off Mach number of M = 0.2. At this incidence velocity, separation on the wing section, accompanied by increased drag, is triggered by the strong slat edge vortex at high angles of attack. On the basis of global force measurements and local static pressure data, the effect of pulsed blowing on the complex flow is evaluated, considering various momentum coefficients and spanwise distributions of the actuation effort. It is shown that through local intensification of forcing, a momentum coefficient of less than suffices to offset the stall by 2.4°, increase the maximum lift by more than 10% and reduce the drag by 37% compared to the uncontrolled flow. View Full-Text
Keywords: flow control; leading edge; fluidic actuator flow control; leading edge; fluidic actuator
►▼ Show Figures 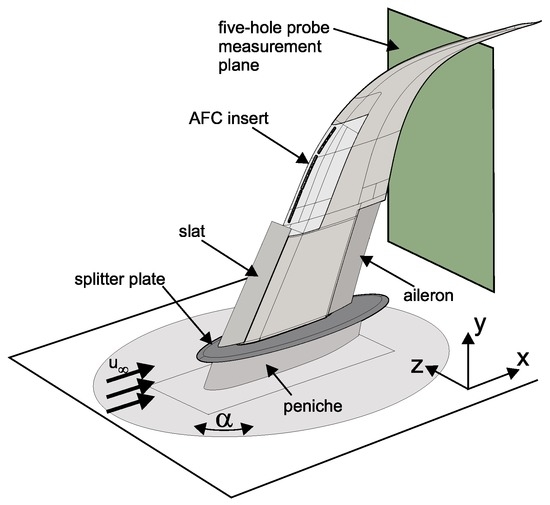