Assessment of Mineral and Phenolic Profiles and Their Association with the Antioxidant, Cytotoxic Effect, and Antimicrobial Potential of Lycium chinense Miller
Next Article in Special Issue

Plant Triterpenoid Crosstalk: The Interaction of Brassinosteroids and Phytoecdysteroids in Lepidium sativum
Previous Article in Journal

Effects of Soil Fertilization on Terpenoids and Other Carbon-Based Secondary Metabolites in Rosmarinus officinalis Plants: A Comparative Study

Upon harvest, Western redcedar (WRC; Thuja plicata) trees have a high incidence and extent of heartwood rot. While monoterpenoids and lignans have been linked to rot resistance in this species, other specialized metabolites, such as diterpenes, are likely to contribute to rot resistance. Here we report the cloning and functional assessment of three putative diterpene synthase (TpdiTPS) genes expressed during heartwood formation in WRC. The predicted proteins of the three genes lack either of the two catalytically independent active sites typical of most diTPS, indicating monofunctional rather than bifunctional activity. To identify potential catalytic activities of these proteins, we expressed them in genetically engineered Escherichia coli strains that produce four potential substrates, geranylgeranyl diphosphate (GGDP), ent, syn, and normal stereoisomers of copalyl diphosphate (CDP). We found that TpdiTPS3 used GGDP to produce CDP. TpdiTPS2 used normal CDP to produce levopimaradiene. TpdiTPS1 showed stereoselectivity as it used normal CDP to produce sandaracopimaradiene and syn-CDP to produce syn-stemod-13(17)-ene. These genes and protein enzymatic activities have not been previously reported in WRC and provide an opportunity to assess their potential roles in heartwood rot resistance in this economically important species. View Full-Text
Keywords: diterpene synthase; heartwood; secondary metabolites; western redcedar diterpene synthase; heartwood; secondary metabolites; western redcedar
►▼ Show Figures 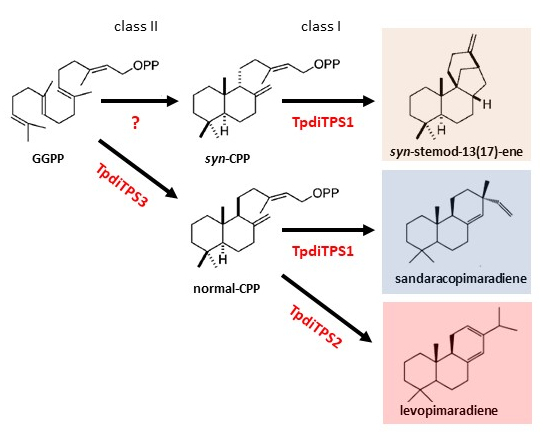