Insight into the Chromosome Structure of the Cultivated Tetraploid Alfalfa (Medicago sativa subsp. sativa L.) by a Combined Use of GISH and FISH Techniques

Cytogenetic research in Medicago sativa subsp. sativa L., the cultivated tetraploid alfalfa (2n = 4x = 32), has lagged behind other crops mostly due to the small size and the uniform morphology of its chromosomes. However, in the last decades, the development of molecular cytogenetic techniques based on in situ hybridization has largely contributed to overcoming these limitations. The purpose of this study was to extend our knowledge about the chromosome structure of alfalfa by using a combination of genomic in situ hybridization (GISH) and fluorescence in situ hybridization (FISH) techniques. The results of self-GISH (sGISH) suggested that a substantial part of the repetitive fraction of the genome of subsp. sativa is constituted by tandem repeats typical of satellite DNA. The coincidence of sGISH and C-banding patterns supported this assumption. The FISH mapping of the Arabidopsis-type TTTAGGG telomeric repeats demonstrated, for the first time, that the alfalfa telomeres consist of this type of sequence and revealed a massive presence of interstitial telomeric repeats (ITRs). In the light of this finding M. sativa appears to be a suitable material for studying the origin and function of such extra telomeric repeats. To further exploit this result, investigation will be extended to the diploid subspp. coerulea and falcata in order to explore possible connections between the distribution of ITRs, the ploidy level, and the evolutionary pathway of the taxa. View Full-Text
Keywords: Medicago sativa; FISH; GISH; C-banding; repetitive DNA; telomeres Medicago sativa; FISH; GISH; C-banding; repetitive DNA; telomeres
►▼ Show Figures 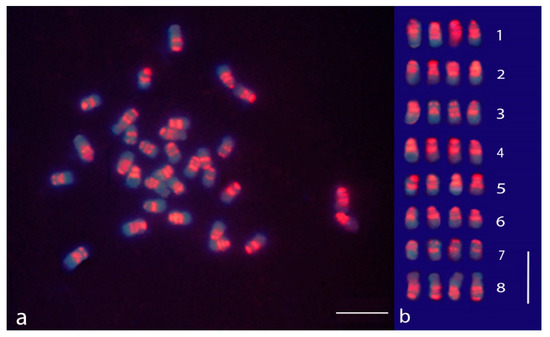 Falistocco, E. Insight into the Chromosome Structure of the Cultivated Tetraploid Alfalfa (Medicago sativa subsp. sativa L.) by a Combined Use of GISH and FISH Techniques. Plants 2020, 9, 542. https://doi.org/10.3390/plants9040542