Insight into the Chromosome Structure of the Cultivated Tetraploid Alfalfa (Medicago sativa subsp. sativa L.) by a Combined Use of GISH and FISH Techniques
Previous Article in Special Issue

Bupleurum L. (Apiaceae) is a perennial and herbal genus, most species of which have high medicinal value. However, few studies have been performed using plastome data in this genus, and the phylogenetic relationships have always been controversial. In this study, the plastid genomes of Bupleurum chinense and Bupleurum commelynoideum were sequenced, and their gene content, order, and structure were counted and analyzed. The only three published Bupleurum species (B. boissieuanum, B. falcatum, and B. latissimum) and other fifteen allied species were selected to conduct a series of comparative and phylogenetic analyses. The genomes of B. chinense and B. commelynoideum were 155,869 and 155,629 bp in length, respectively, both of which had a typical quadripartite structure. The genome length, structure, guanine and cytosine (GC) content, and gene distribution were highly similar to the other three Bupleurum species. The five Bupleurum species had nearly the same codon usages, and eight regions (petN-psbM, rbcL-accD, ccsA-ndhD, trnK(UUU)-rps16, rpl32-trnL(UAG)-ccsA, petA-psbJ, ndhF-rpl32, and trnP(UGG)-psaJ-rpl33) were found to possess relatively higher nucleotide diversity, which may be the promising DNA barcodes in Bupleurum. Phylogenetic analysis revealed that all Bupleurum species clustered into a monophyletic clade with high bootstrap support and diverged after the Chamaesium clade. Overall, our study provides new insights into DNA barcoding and phylogenetic relationship between Bupleurum and its related genera, and will facilitate the population genomics, conservation genetics, and phylogenetics of Bupleurum in Apiaceae. View Full-Text
Keywords: Apiaceae; Bupleurum; plastid genome; comparative analysis; phylogeny; DNA barcoding Apiaceae; Bupleurum; plastid genome; comparative analysis; phylogeny; DNA barcoding
►▼ Show Figures 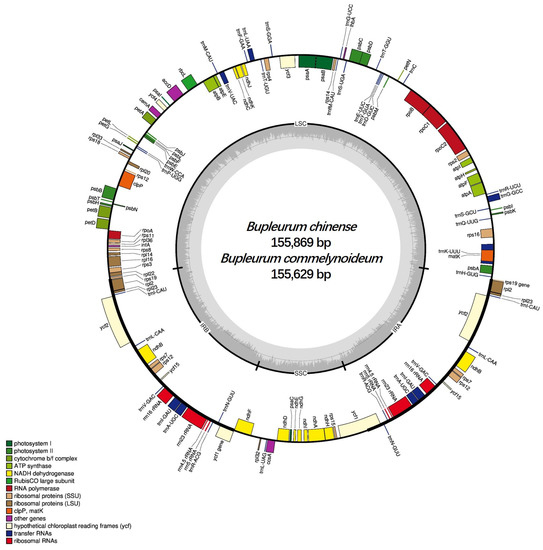