Fraxinus species belongs to the Oleaceae family, commonly known as Ash tree, and has been utilized as a folk medicine with various medicinal properties, including anti-obesity activity. The goal of the present study was to establish quality control parameters using microscopic characterization, phytochemical differentiation, and anti-lipase activity evaluation of five Fraxinus plants in Korea. Microscopic evaluation of the lower surface, petiole, and midrib of leaves, and stem bark showed discriminative anatomical characteristics, such as the stomatal index of the lower leaf surface; the number of sclerenchyma cells, and the diameter of parenchyma cells in the petiole and midrib; and the cork cell size and fiber frequency in the stem bark. Phytochemical analysis using high-performance liquid chromatography revealed the significant variation in the chemical profiles of the 12 major secondary metabolites among the samples. The orthogonal projections to latent structure-discrimination analysis efficiently differentiated each group belonging to each Fraxinus plant with the anatomical and quantification data. F. rhynchophylla and ligstroside showed the most potent anti-lipase activity among the plants and the 12 major metabolites, respectively. These findings could serve as the scientific criteria for the appropriate identification and establishment of standards for the use of Fraxinus species as medicinal plants. View Full-Text
Keywords: Fraxinus species; microscopic characterization; chemical profiles; anti-lipase activity Fraxinus species; microscopic characterization; chemical profiles; anti-lipase activity
►▼ Show Figures 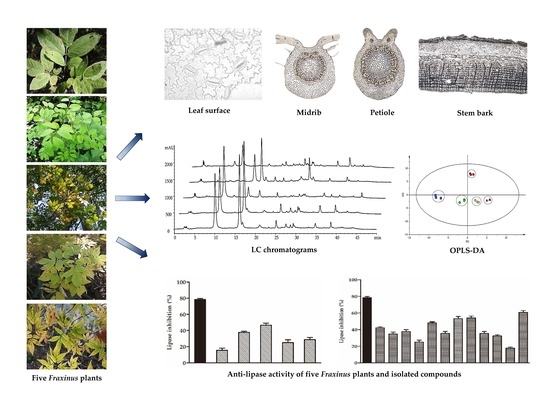