Laboratory of Plant Physiology, Groningen Institute for Evolutionary Life Sciences, University of Groningen, 9747 AG Groningen, The Netherlands
*
Author to whom correspondence should be addressed.
Plants 2020, 9(10), 1283; https://doi.org/10.3390/plants9101283
Received: 31 August 2020 / Revised: 22 September 2020 / Accepted: 24 September 2020 / Published: 28 September 2020
(This article belongs to the Special Issue Selected Papers from the 28th International Symposium of the Scientific Centre for Fertilizers (CIEC) “Fertilization and Nutrient Use Efficiency in Mediterranean Environments”)

To study the regulation of sulfate metabolism in barley (Hordeum vulgare), seedlings were exposed to atmospheric hydrogen sulfide (H2S) in the presence and absence of a sulfate supply. Sulfate deprivation reduced shoot and root biomass production by 60% and 70%, respectively, and it affected the plant’s mineral nutrient composition. It resulted in a 5.7- and 2.9-fold increased shoot and root molybdenum content, respectively, and a decreased content of several other mineral nutrients. Particularly, it decreased shoot and root total sulfur contents by 60% and 70%, respectively. These decreases could be ascribed to decreased sulfate contents. Sulfate deficiency was additionally characterized by significantly lowered cysteine, glutathione and soluble protein levels, enhanced dry matter, nitrate and free amino acid contents, an increased APS reductase (APR) activity and an increased expression and activity of the root sulfate uptake transporters. When sulfate-deprived barley was exposed to 0.6 µL L−1 atmospheric H2S, the decrease in biomass production and the development of other sulfur deficiency symptoms were alleviated. Clearly, barley could use H2S, absorbed by the foliage, as a sulfur source for growth. H2S fumigation of both sulfate-deprived and sulfate-sufficient plants downregulated APR activity as well as the expression and activity of the sulfate uptake transporters. Evidently, barley switched from rhizospheric sulfate to atmospheric H2S as sulfur source. Though this indicates that sulfate utilization in barley is controlled by signals originating in the shoot, the signal transduction pathway involved in the shoot-to-root regulation must be further elucidated. View Full-Text
Keywords: APS reductase; air pollution; HvST1; hydrogen sulfide; sulfate deficiency; sulfate transporter APS reductase; air pollution; HvST1; hydrogen sulfide; sulfate deficiency; sulfate transporter
►▼ Show Figures 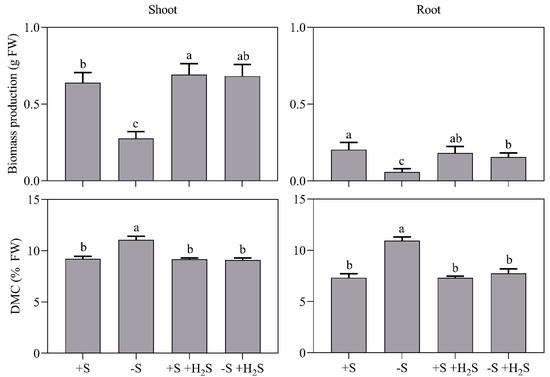