Dynamics of H3K27me3 Modification on Plant Adaptation to Environmental Cues

In the context of climate change and water scarcity, there is a need to develop and use drought-tolerant sesame cultivars. This study was conducted to evaluate the response of 13 sesame genotypes, including 11 mutants and their wild-types, to drought during germination and early seedling growth. Moderate and severe drought stress was simulated by applying polyethylene glycol (PEG) at two osmotic potentials, −0.6 MPa and −1.2 MPa, respectively, on seeds of two successive mutant generations, M2 and M3. The parameters measured or calculated were germination percentage (GP), germination rate (GR), mean germination time (MGT), root length (RL), shoot length (SL), root to shoot ratio (RSR), and the seedling vigor index (SVI). Results showed the significant effect of genotype, drought, and drought × genotype interaction on all parameters investigated. Under severe drought, seeds of seven genotypes, including wild types, were not able to germinate. There was a drastic decline of all parameters for the rest, except MGT and RSR, which markedly increased. Interestingly, two mutants, “ML2-5” and “ML2-10”, were identified as the most tolerant to severe drought and the most stable over both generations. The present work is the first report of sesame germplasm with such a high level of tolerance to drought during germination and early seedling growth stages. View Full-Text
Keywords: abiotic stress; germplasm; oilseed crop; osmotic potential; Sesamum indicum L.; stability abiotic stress; germplasm; oilseed crop; osmotic potential; Sesamum indicum L.; stability
►▼ Show Figures 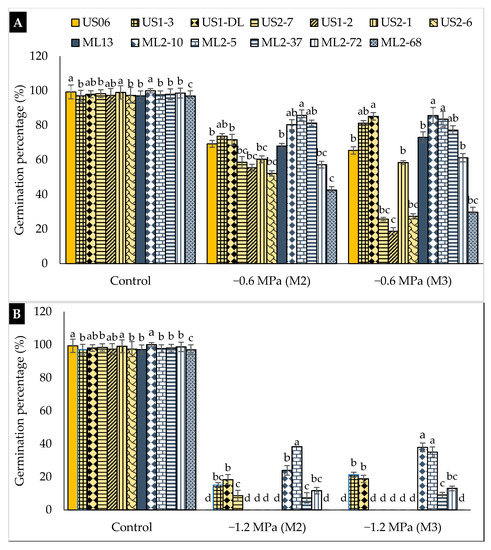