Plant height is significantly correlated with grain traits, which is a component of wheat yield. The purpose of this study is to investigate the main quantitative trait loci (QTLs) that control plant height and grain-related traits in multiple environments. In this study, we constructed a high-density genetic linkage map using the Wheat50K SNP Array to map QTLs for these traits in 198 recombinant inbred lines (RILs). The two ends of the chromosome were identified as recombination-rich areas in all chromosomes except chromosome 1B. Both the genetic map and the physical map showed a significant correlation, with a correlation coefficient between 0.63 and 0.99. However, there was almost no recombination between 1RS and 1BS. In terms of plant height, 1RS contributed to the reduction of plant height by 3.43 cm. In terms of grain length, 1RS contributed to the elongation of grain by 0.11 mm. A total of 43 QTLs were identified, including eight QTLs for plant height (PH), 11 QTLs for thousand grain weight (TGW), 15 QTLs for grain length (GL), and nine QTLs for grain width (GW), which explained 1.36–33.08% of the phenotypic variation. Seven were environment-stable QTLs, including two loci (Qph.nwafu-4B and Qph.nwafu-4D) that determined plant height. The explanation rates of phenotypic variation were 7.39–12.26% and 20.11–27.08%, respectively. One QTL, Qtgw.nwafu-4B, which influenced TGW, showed an explanation rate of 3.43–6.85% for phenotypic variation. Two co-segregating KASP markers were developed, and the physical locations corresponding to KASP_AX-109316968 and KASP_AX-109519968 were 25.888344 MB and 25.847691 MB, respectively. Qph.nwafu-4B, controlling plant height, and Qtgw.nwafu-4B, controlling TGW, had an obvious linkage relationship, with a distance of 7–8 cM. Breeding is based on molecular markers that control plant height and thousand-grain weight by selecting strains with low plant height and large grain weight. Another QTL, Qgw.nwafu-4D, which determined grain width, had an explanation rate of 3.43–6.85%. Three loci that affected grain length were Qgl.nwafu-5A, Qgl.nwafu-5D.2, and Qgl.nwafu-6B, illustrating the explanation rates of phenotypic variation as 6.72–9.59%, 5.62–7.75%, and 6.68–10.73%, respectively. Two QTL clusters were identified on chromosomes 4B and 4D. View Full-Text
Keywords: wheat; plant height; grain traits; Wheat50K; genetic map; QTL wheat; plant height; grain traits; Wheat50K; genetic map; QTL
►▼ Show Figures 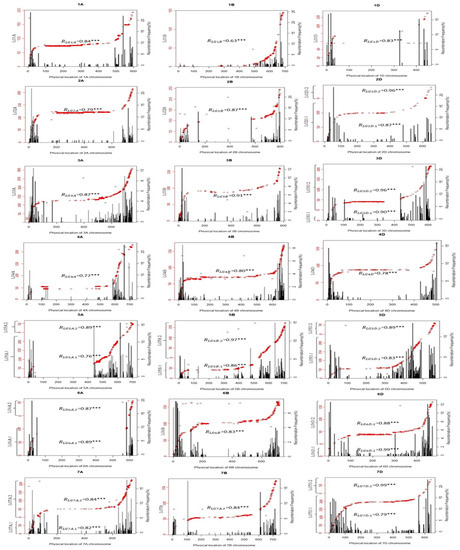