Assessment of Morpho-Physiological, Biochemical and Antioxidant Responses of Tomato Landraces to Salinity Stress
Next Article in Special Issue

Agave lechuguilla waste biomass (guishe) is an undervalued abundant plant material with natural active compounds such as flavonoids. Hence, the search and conservation of flavonoids through the different productive areas have to be studied to promote the use of this agro-residue for industrial purposes. In this work, we compared the proportion of total flavonoid content (TFC) among the total polyphenolics (TPC) and described the variation of specific flavonoid profiles (HPLC-UV-MS/MS) of guishe from three locations. Descriptive environmental analysis, using remote sensing, was used to understand the phytochemical variability among the productive regions. Furthermore, the effect of extractive solvent (ethanol and methanol) and storage conditions on specific flavonoid recovery were evaluated. The highest TPC (16.46 ± 1.09 GAE/g) was observed in the guishe from region 1, which also had a lower normalized difference water index (NDWI) and lower normalized difference vegetation index (NDVI). In contrast, the TFC was similar in the agro-residue from the three studied areas, suggesting that TFC is not affected by the studied environmental features. The highest TFC was found in the ethanolic extracts (6.32 ± 1.66 QE/g) compared to the methanolic extracts (3.81 ± 1.14 QE/g). Additionally, the highest diversity in flavonoids was found in the ethanolic extract of guishe from region 3, which presented an intermedia NDWI and a lower NDVI. Despite the geo-climatic induced variations of the phytochemical profiles, the results confirm that guishe is a valuable raw material in terms of its flavonoid-enriched bioactive extracts. Additionally, the bioactive flavonoids remain stable when the conditioned agro-residue was hermetically stored at room temperature in the dark for nine months. Finally, the results enabled the establishment of both agro-ecological and biotechnological implications. View Full-Text
Keywords: flavonoid concentrations; waste biomass; bioactive compounds; HPLC analysis; geographical variability; solvent extraction; storage conditions flavonoid concentrations; waste biomass; bioactive compounds; HPLC analysis; geographical variability; solvent extraction; storage conditions
►▼ Show Figures 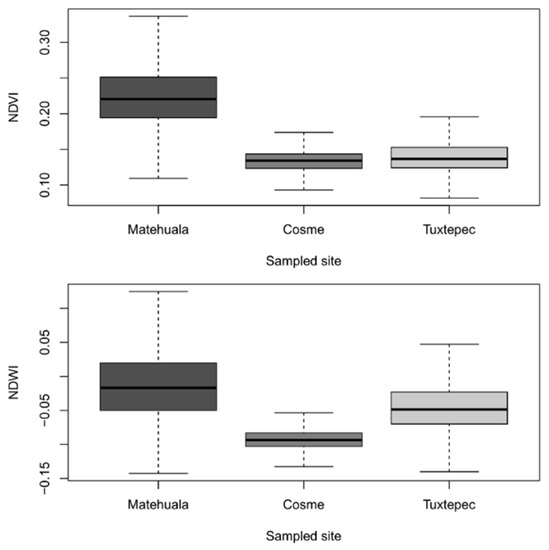