Principles and Applications of the Global Human Settlement Layer as Baseline for the Land Use Efficiency Indicator—SDG 11.3.1
Previous Article in Journal

A Comparative Study of Statistics-Based Landslide Susceptibility Models: A Case Study of the Region Affected by the Gorkha Earthquake in Nepal
Previous Article in Special Issue

The positive effects of active mobility on mental and physical health as well as on air quality are widely acknowledged. Increasing the share of active travel is therefore an aim in many countries. Providing bicycle-safe infrastructure is one way to promote cycling. Roundabouts are a common traffic infrastructure and are supposed to facilitate safe and smooth traffic flow. However, data on road traffic accidents indicate an over-proportional involvement of cyclists in accidents at roundabouts. In the present study, the influence of roundabout geometry and traffic flow on bicycle accident occurrence was investigated using a logistic regression approach on twelve parameters of N = 294 mostly small- and mini-sized single-lane roundabouts in the Canton of Berne, Switzerland. Average weekday motorized traffic was identified as a major factor in explaining bicycle accident occurrence at roundabouts. Further, the radius of the central island, the location of the roundabout (in town vs. out of town) and the number of legs were significantly related to bicycle accident occurrence. While these results are in general agreement with findings from similar studies, the findings regarding the central island’s radius and the number of legs underpin the need for roundabout type-specific studies: Some parameters may not prove relevant in intermediate- to large-sized roundabouts, but become critical in small or mini roundabouts, which are common in Switzerland and numerous in the present sample. View Full-Text
Keywords: logistic regression; roundabout; bicycle; accident analysis logistic regression; roundabout; bicycle; accident analysis
►▼ Show Figures 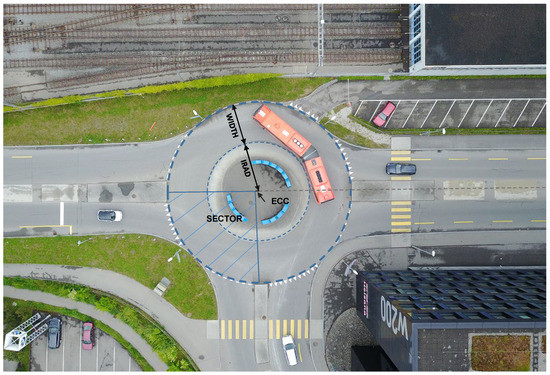