Getting the Akt Together: Guiding Intracellular Akt Activity by PI3K
Previous Article in Journal

SQUAMOSA-promoter binding protein (SBP)-box genes encode a family of plant-specific transcription factors that play vital roles in plant growth and development. In this study, 15 SBP-box genes were identified and isolated from Citrus clementina (CclSBPs), where 10 of these genes were predicted to be putative targets of Citrus clementina microRNA156 (CclmiR156). The 15 CclSBP genes could be classified into six groups based on phylogenetic analysis, diverse intron–exon structure, and motif prediction, similar to the SQUAMOSA promoter binding protein-like (SPL) gene family of Populus trichocarpa and Arabidopsis thaliana. Furthermore, CclSBPs classified into a group/subgroup have similar gene structures and conserved motifs, implying their functional redundancy. Tissue-specific expression analysis of CclSBPs demonstrated their diversified expression patterns. To further explore the potential role of CclSBPs during floral inductive water deficits, the dynamic changes of the 15 CclSBPs were investigated during floral inductive water deficits, and the results showed that some CclSBPs were associated with floral induction. Among these genes, CclSBP6 was not homologous to the Arabidopsis SBP-box gene family, and CclSBP7 was regulated by being alternatively spliced. Therefore, CclSBP6 and CclSBP7 were genetically transformed in Arabidopsis. Overexpression of the two genes changed the flowering time of Arabidopsis. View Full-Text
Keywords: Citrus clementina; SBP-box genes; gene expression; evolutionary comparison; functional diversity Citrus clementina; SBP-box genes; gene expression; evolutionary comparison; functional diversity
►▼ Show Figures 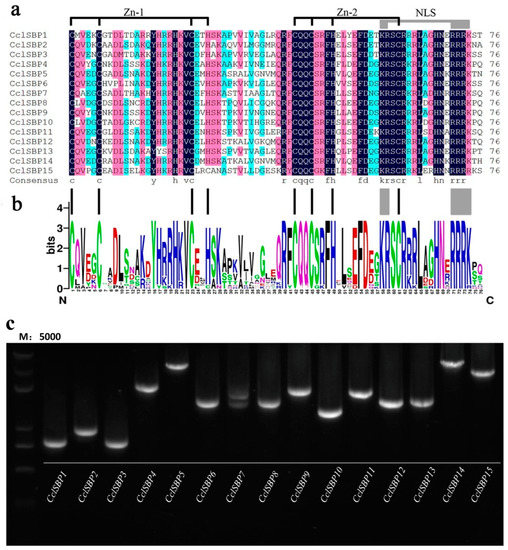