Protective Effect of Panaxynol Isolated from Panax vietnamensis against Cisplatin-Induced Renal Damage: In Vitro and In Vivo Studies
Next Article in Special Issue

Misfolding and aggregation of transthyretin (TTR) is widely known to be responsible for a progressive systemic disorder called amyloid transthyretin (ATTR) amyloidosis. Studies suggest that TTR aggregation is initiated by a rate-limiting dissociation of the homo-tetramer into its monomers, which can rapidly misfold and self-assemble into amyloid fibril. Thus, exploring conformational change involved in TTR monomer misfolding is of vital importance for understanding the pathogenesis of ATTR amyloidosis. In this work, microsecond timescale hybrid-resolution molecular dynamics (MD) simulations combined with Markov state model (MSM) analysis were performed to investigate the misfolding mechanism of the TTR monomer. The results indicate that a macrostate with partially unfolded conformations may serve as the misfolded state of the TTR monomer. This misfolded state was extremely stable with a very large equilibrium probability of about 85.28%. With secondary structure analysis, we found the DAGH sheet in this state to be significantly destroyed. The CBEF sheet was relatively stable and sheet structure was maintained. However, the F-strand in this sheet was likely to move away from E-strand and reform a new β-sheet with the H-strand. This observation is consistent with experimental finding that F and H strands in the outer edge drive the misfolding of TTR. Finally, transition pathways from a near native state to this misfolded macrostate showed that the conformational transition can occur either through a native-like β-sheet intermediates or through partially unfolded intermediates, while the later appears to be the main pathway. As a whole, we identified a potential misfolded state of the TTR monomer and elucidated the misfolding pathway for its conformational transition. This work can provide a valuable theoretical basis for understanding of TTR aggregation and the pathogenesis of ATTR amyloidosis at the atomic level. View Full-Text
Keywords: protein misfolding; transthyretin amyloidosis; molecular dynamics simulation; Markov state model protein misfolding; transthyretin amyloidosis; molecular dynamics simulation; Markov state model
►▼ Show Figures 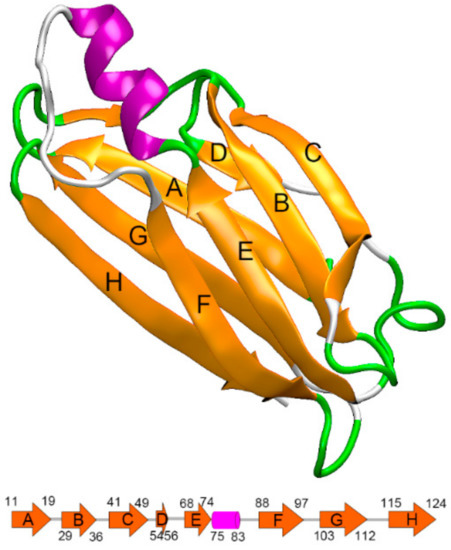