Experimental studies on the reactive extraction of fumaric acid with Amberlite LA-2 from Rhizopus oryzae suspensions using three solvents with different dielectric constants varying from 9.08 to 1.90 (dichloromethane, n-butyl acetate, and n-heptane, respectively) underlined the particular behavior of the extraction system in the presence of fungal biomass. The interfacial mass flow of the reaction product was found to be significantly affected by the biomass, due mainly to its adsorption onto the phase separation interface, this leading to the appearance of a physical barrier against the solute’s transfer. However, the magnitude of the adsorption phenomenon was found to depend on Rhizopus oryzae’s affinity for the solvent phase, which increased significantly from dichloromethane to n-heptane. The negative influence of the biomass on the interfacial mass transfer can be partially counteracted by adding 1-octanol into the organic phase, improving the solvent’s ability to solve the fumaric acid–Amberlite LA-2 complex and simplifying the reactive extraction mechanism, effects that were found to be more important for low-polar solvents. Consequently, for the same mixing intensity, the maximum amplification factor was reached for n-heptane, its value being almost 5–6 times higher than that obtained for dichloromethane and over 2 times higher than that obtained with n-butyl acetate. View Full-Text
Keywords: fumaric acid; Amberlite LA-2; 1-octanol; reactive extraction; mass flow; Rhizopus oryzae fumaric acid; Amberlite LA-2; 1-octanol; reactive extraction; mass flow; Rhizopus oryzae
►▼ Show Figures 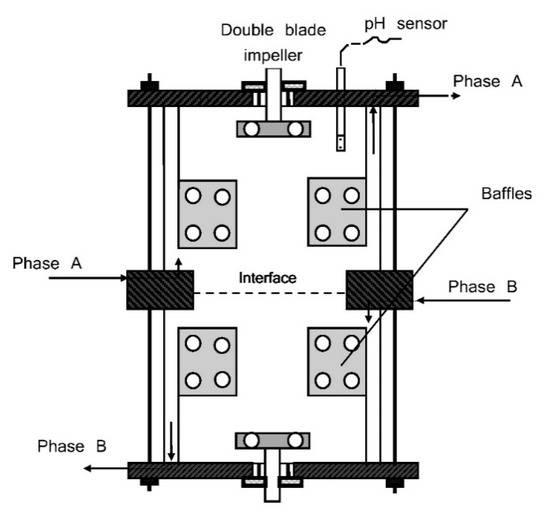