The Link between Homocysteine and Omega-3 Polyunsaturated Fatty Acid: Critical Appraisal and Future Directions
Next Article in Special Issue

Chemotherapy-Induced Leukopenia (CIL) is associated with increased mortality and economic burden on patients. This study was conducted to evaluate whether inclusion of green jackfruit flour in regular diet of those patients receiving chemotherapy, could prevent CIL. This was a retrospective study conducted among a group of patients undergoing chemotherapy for solid tumors at Renai Medicity Hospital, Palarivattom, Cochin, Kerala, India, since June 2018. The study group comprised of 50 consecutive subjects, who were supplemented with green jackfruit flour diet in their regular diet and further followed up prospectively. The control group was retrospective with 50 subjects prior to June 2018, with no diet supplements. Those who received less than three cycles were excluded from either arm. The mean age of the participants in study group and control group were 53.16 ± 11.06 and 56.96 ± 12.16 years respectively. In the study group, six patients out of 37, and 20 patients out of 50 in the control group, developed CIL. They received 38 and 105 vials of filgrastim respectively. After excluding those cycles in study group patients, where green jackfruit flour was not taken, the mean number of cycles in which CIL developed (p = 0.00) and number of vials of filgrastim taken per cycle (p = 0.00) were significantly different from control group and no patient in the study group developed CIL. Inclusion of green jackfruit flour as a dietary intervention prevents chemotherapy-induced leukopenia in patients undergoing chemotherapy along with pegfilgrastim. View Full-Text
Keywords: jackfruit; chemotherapy-induced leukopenia; chemotoxicity; pegfilgrastim; plant based compounds; natural compounds jackfruit; chemotherapy-induced leukopenia; chemotoxicity; pegfilgrastim; plant based compounds; natural compounds
►▼ Show Figures 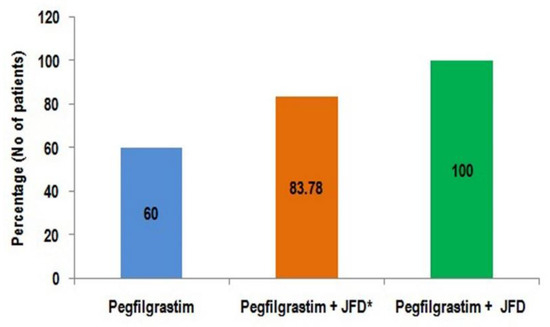