Role of Pea LTPs and Abscisic Acid in Salt-Stressed Roots

A panel of ethane-methyl-sulfonate-mutagenized japonica rice lines was grown in the presence of salinity in order to identify genes required for the expression of salinity tolerance. A highly nontolerant selection proved to harbor a mutation in FLN2, a gene which encodes fructokinase-like protein2. Exposure of wild-type rice to salinity up-regulated FLN2, while a CRISPR/Cas9-generated FLN2 knockout line was hypersensitive to the stress. Both ribulose 1,5-bisphosphate carboxylase/oxygenase activity and the abundance of the transcript generated by a number of genes encoding components of sucrose synthesis were lower in the knockout line than in wild-type plants’ leaves, while the sucrose contents of the leaf and root were, respectively, markedly increased and decreased. That sugar partitioning to the roots was impaired in FLN2 knockout plants was confirmed by the observation that several genes involved in carbon transport were down-regulated in both the leaf and in the leaf sheath. The levels of sucrose synthase, acid invertase, and neutral invertase activity were distinctly lower in the knockout plants’ roots than in those of wild-type plants, particularly when the plants were exposed to salinity stress. The compromised salinity tolerance exhibited by the FLN2 knockout plants was likely a consequence of an inadequate supply of the assimilate required to support growth, a problem which was rectifiable by providing an exogenous supply of sucrose. The conclusion was that FLN2, on account of its influence over sugar metabolism, is important in the context of seedling growth and the rice plant’s response to salinity stress. View Full-Text
Keywords: Oryza sativa; FLN2; sugar partitioning; plant growth; salinity hypersensitivity Oryza sativa; FLN2; sugar partitioning; plant growth; salinity hypersensitivity
►▼ Show Figures 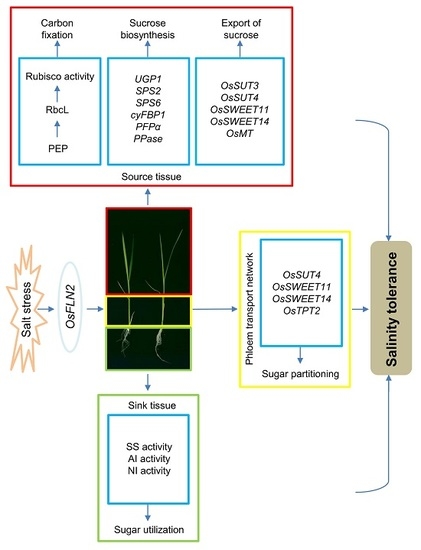