Non-steroidal anti-inflammatory drugs (NSAID) exacerbated respiratory disease (N-ERD) is a disease integrated by asthma, nasal polyps, and hypersensitivity to non-steroidal anti-inflammatory drugs (NSAID). Genetic association studies have explored single nucleotide polymorphisms (SNPs) in genes involved in theoretical pathophysiological mechanisms, but most of these lack replication of findings in second populations. Our objective was to evaluate the association of SNPs in candidate genomic regions described in Asian and European subjects with N-ERD in Mexican-mestizo patients. We designed a replicative study in two stages. We included 381 SNPs selected by fine mapping of associated genes in a microarray, which were tested in three groups: N-ERD (N), asthma (A), and control group (CG); by means of GoldenGate array, positive results by genetic models were validated in the second stage in another population through qPCR with the same methodology. In the allelic model, we identified 11 SNPs in N vs. CG comparison, and five in N vs. A and A vs. CG, respectively. By genetics models, all SNPs in PPARG, rs13239058 in TBXAS1, and rs1554286 and rs1800872 in IL10 were associated in both models. In the second stage, only rs1800872CC showed an association in the dominant model comparing N vs. GC, p = 0.004, OR = 0.44. In conclusion, rs1800872 in IL10 was the only associated with N-ERD in Mexican-mestizo patients. View Full-Text
Keywords: IL10; SNP; N-ERD; genetic association IL10; SNP; N-ERD; genetic association
►▼ Show Figures 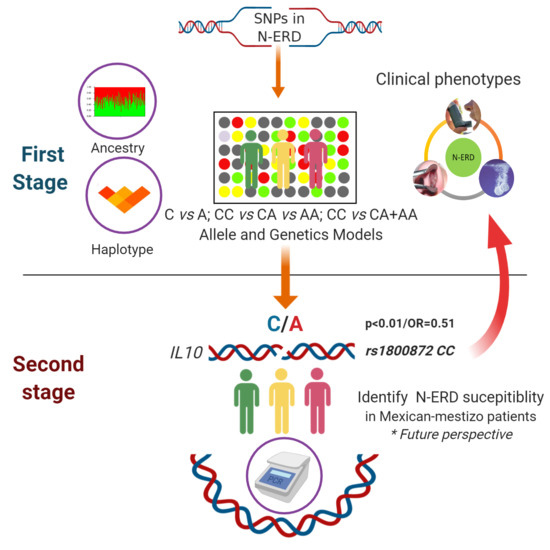