:
Herein, a waterborne acrylic coating doped with pH sensitive colophony microcapsules containing corrosion inhibitors was studied on carbon steel plates. The changes in the physical properties of the coatings were studied. The microcapsule coating specimens maintained more noble Ecorr values compared to the control in deionized water and simulated concrete pore solutions with −513 and −531 mVSCE, respectively. Additionally, the microcapsule polarization results for both pH 12.6 and 6.2 electrolyte solutions showed lower icorr values of 1.20 × 10−6 and 3.24 × 10−6 A·cm−2, respectively, compared to the control sample (1.15 × 10−5 and 4.21 × 10−5 A·cm−2). Therefore, the microcapsule coating provided more protection from chloride attack on the substrate as well as the deleterious effects of low pH on carbon steel. The electrochemical impedance spectroscopy analysis corroborated the DC polarization results, showing increased corrosion resistance for the microcapsule coated specimens compared to the control. Moreover, the Rpore and Rct are much higher than the control, indicating the protection of the inhibitors. The Ceff,dl also shows lower values for the microcapsule coating than the control, showing a more protective and less doped double layer.
Keywords:
smart corrosion inhibitors; acrylic coating; simulated concrete pore solution; microcapsules; chlorides; double-emulsion

The corrosion of steel reinforced concrete has been a source of significant economic loss in the construction and transportation industry [1]. Therefore, the use of physical barriers has been used to deter the corrosion process, such as the use of coatings [2,3,4]. The use of coatings in reinforced concrete structures has been widely studied for its corrosion protection in mortar as well as simulated concrete pore solution (SCPS) [5,6]. The most common coating type for the reinforced concrete application is the use of an epoxy coating, due to its very low porosity, increased hardness, and offered protection against chlorides and other corrosive agents [7]. However, epoxy coatings can present a large cost and long drying periods whereas acrylic coatings can provide a faster drying, cheaper solution.
Due to the amount of volatile organic compounds (VOCs) and the harmful environmental effects they impart, the use of waterborne coatings has been an attractive area of study in recent years [8]. In waterborne coatings, acrylics are the most often used binder resin [9]. They present a viable alternative to solvent-based coatings which contain volatile organic compound (VOC) that negatively affect the environment [10]. The use of functionalized waterborne acrylic (WA) coatings has been of particular interest. In the works of Ecco et al. and González et al., CeO nanoparticles were incorporated in the WA coatings which improved the corrosion resistance significantly [11,12]. Similarly, the use of a WA coating with phosphate functionalities has been shown to be able to phosphatize the metal surface using a thin coating containing functional nanoparticles [13]. However, WA coatings are not without drawbacks, Dogen-Guner et al. used cellulose nanocrystals to enhance the mechanical properties of WA coatings without the use of added coalescents, which often add VOCs to plasticize the particles to enable film formation [9]. In the work of Ni et al., poly(styrene-acrolein)/reduced graphene oxide nanocomposites were synthesized to disperse corrosion inhibiting graphene oxide to improve the corrosion resistance given by the coating [10]. The nanocomposites proved to be effective at enhancing the anticorrosion properties of the coating, however, their fabrication may prove to present difficulties when considering costs and scalability.
In recent years, the use of microcapsules containing active agents has been of particular interest for the applications of self-healing and corrosion resistance. In the work of Zhang et al., self-healing microcapsules were synthesized for implementation to waterborne epoxy coatings [14]. Bao et al. synthesized microcapsules from ZnO and benzotriazole (BTA) in a simple one-step method to increase corrosion protection in waterborne polyacrylate coatings [15]. Smart microcapsules which can release the active agents in response to certain chemical, mechanical, or other triggers have been particularly of interest in recent coating technologies. An anticorrosion coating containing self-repairing polyurea-formaldehyde microcapsules was developed by Njoku et al. to protect aluminum alloy 2024 [16]. The microcapsules respond to changes in pH or chloride ion concentration, dissolving the shell and allowing the diffusion of corrosion inhibitors.
Similarly, microcapsules made by the double emulsion method have been developed by the authors [17]. The microcapsule shell is composed of colophony (>99% abietic acid) containing NaNO2 corrosion inhibitors. NaNO2 was used due to its excellent performance in concrete environments, in which it can prevent corrosion caused by chloride and carbonation while having good compatibility with concrete [18,19]. The nitrite ions facilitate the formation of stable Fe2O3 and γ-FeOOH in the passive film, protecting the rebar [20]. It was found that, in alkaline solution, the abietic acid shell deprotonates and the shell becomes porous, allowing for the diffusion of the corrosion inhibitor. Furthermore, previous research of colophony in concrete environments showed increased mechanical properties and a decrease in the porosity of the concrete [21]. In this work, a commercial WA coating was doped with colophony microcapsules (MC) containing NaNO2 corrosion inhibitors. The MC coating was then characterized by SEM, water absorption, infinite focus microscope (IFM), and thermal gravimetric analysis (TGA) and compared to the base WA coating. The anticorrosion properties were measured using electrochemical impedance spectroscopy (EIS) and potentiodynamic polarization.

Colophony microcapsules were synthesized according to the protocol previously described by the author with modified stirring speeds. First, ground colophony powder was dissolved in diethyl ether. Then, an aqueous solution of 1.5 M NaNO2 and 1 wt% polyvinyl alcohol (PVA) was added dropwise while stirring with an overhead stirrer at a rate of 550 rpm for 4 min. An aqueous solution of 4 wt% PVA was added under reduced stirring of 350 rpm to create the water-in-oil-in-water double emulsion [22,23]. Lastly, the remaining organic solvent was evaporated by heating at 60 °C for 2 h. The microcapsules were filtered and washed using deionized (DI) water before direct addition to the coating. Carbon steel panels with composition shown in Table 1 as-received from the Q-lab were coated with WA coating, using a drawdown bar, with and without colophony microcapsules with a wet thickness of 50 μm.
The WA coating used was commercially available with composition as shown in Table 2. The coating was left to dry in air for 24 h. The microcapsules were added to the coating before application at a concentration of 50 g/L. Control samples of acrylic coating were prepared for comparison of corrosion performance. The water uptake was determined by gravimetric analysis over a period of 30 days and performed in triplicate. The acrylic coatings with and without MCs were exposed to DI water and the mass change was measured. The specimens were lightly dried by light dabbing before weighing.
The size and morphology of the microcapsules were analyzed by scanning electronic microscopy (SEM, Hitachi High-Tech America Inc., Schaumburg, IL, USA) using a Hitachi TM 3030+ SEM and back scattered electron (BSE, Hitachi High-Tech America Inc., Schaumburg, IL, USA) technique with an excitation signal of 15 kV and 8 μm working distance. Energy dispersive X-ray (EDX, Hitachi High-Tech America Inc., Schaumburg, IL, USA) analysis was also performed on the coating with and without microcapsules to determine the surface atomic composition.
The corrosion performance of the coating was tested using a Gamry series 600 potentiostat (Gamry Instruments, Warminster, PA, USA) with a three-electrode set up: a saturated calomel electrode as reference, a graphite rod as the counter electrode, and carbon steel Q-panels 3 × 6 in with coating as the working electrode. The experiments were conducted in 3.5 wt% NaCl solution in DI water with pH 6.8 and simulated concrete pore solution (SCPS) composed of saturated Ca(OH)2 with pH 12.6. First, open circuit potential was obtained over 1 h to determine the stable steady-state potential. Then, electrochemical impedance spectroscopy (EIS) was performed at OCP using 10 mV r.m.s. with 10 points/decade, scanning the frequencies between 105 and 10−2 Hz. Finally, potentiodynamic polarization scans were performed from −0.2 to +0.2 VOCP to determine the Tafel slopes and calculate the corrosion current density (icorr). All tests were performed in triplicate to ensure reproducibility.

A waterborne acrylic coating doped with pH sensitive colophony microcapsules containing corrosion inhibitors was studied on carbon steel plates. The changes in the physical properties of the coatings were studied. Additionally, the coating was tested under accelerated corrosion conditions in DI and simulated concrete pore solutions contaminated with chloride. The following conclusions can be drawn.

This research was funded by Firestone Research, grant number 639430 and The University of Akron Fellowship FRC-207160.

The authors acknowledge the technical support and facilities from The National Center for Education and Research on Corrosion and Materials Performance (NCERCAMP-UA), The College of Engineering and Polymer Science and The University of Akron. 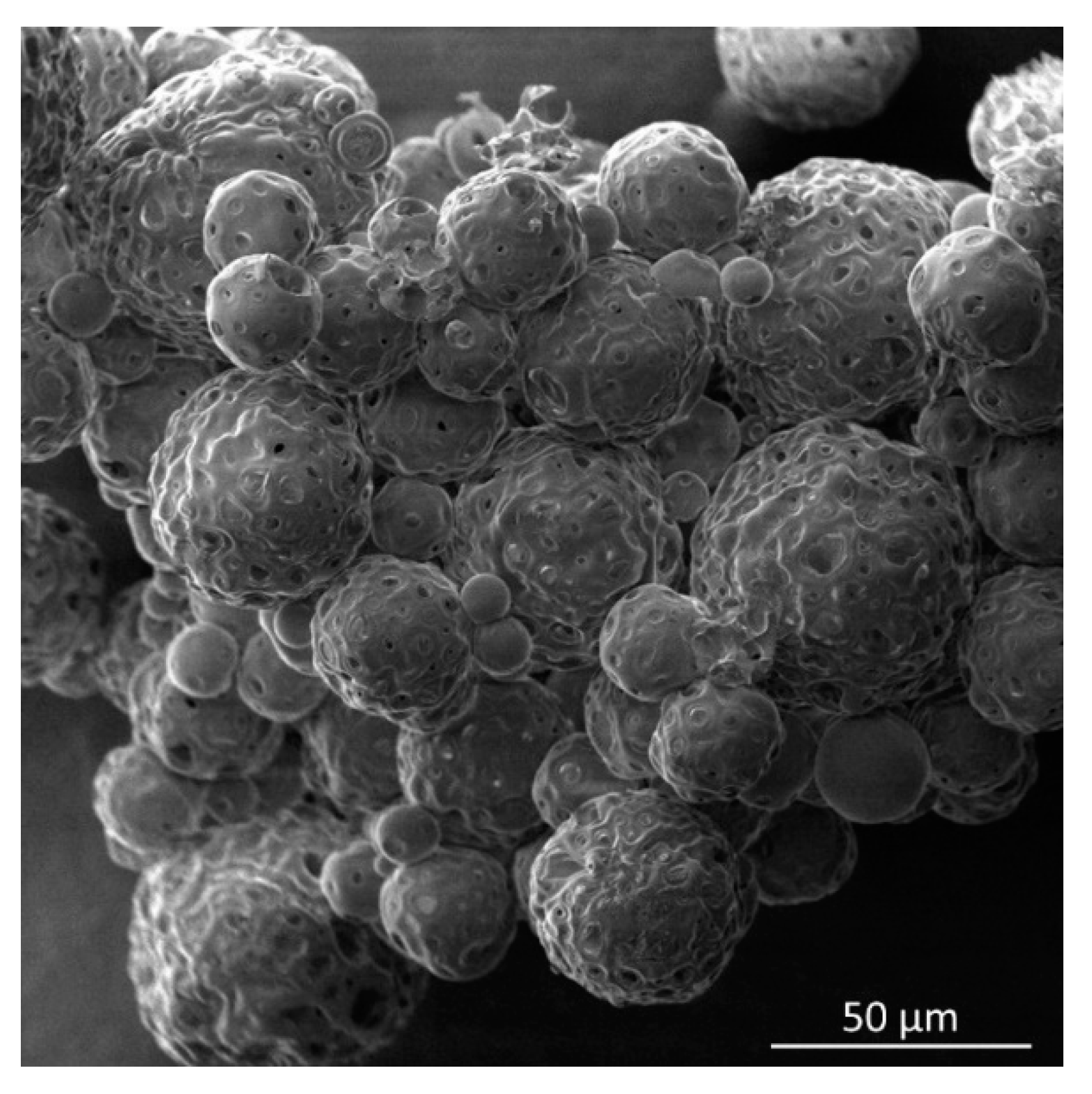 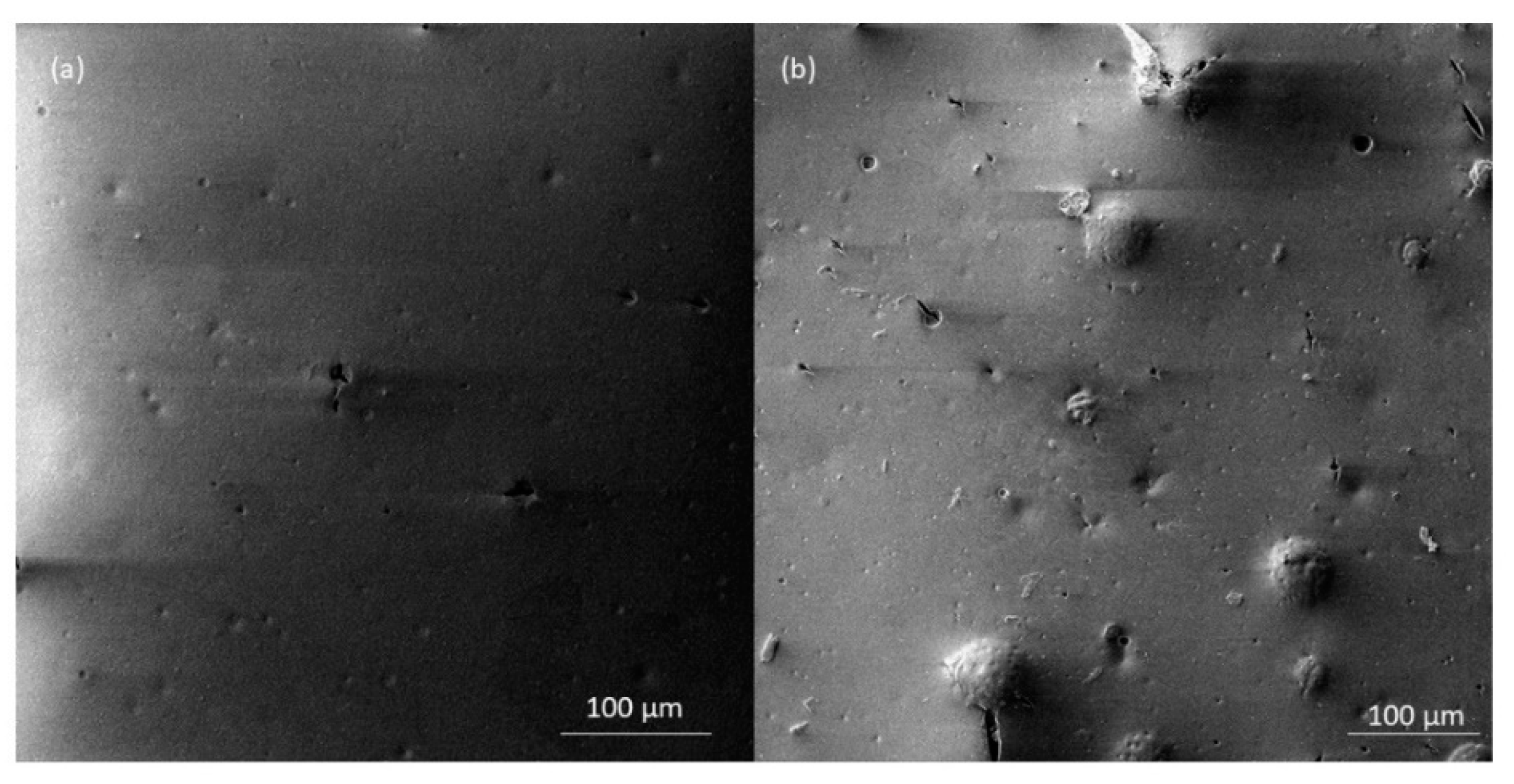 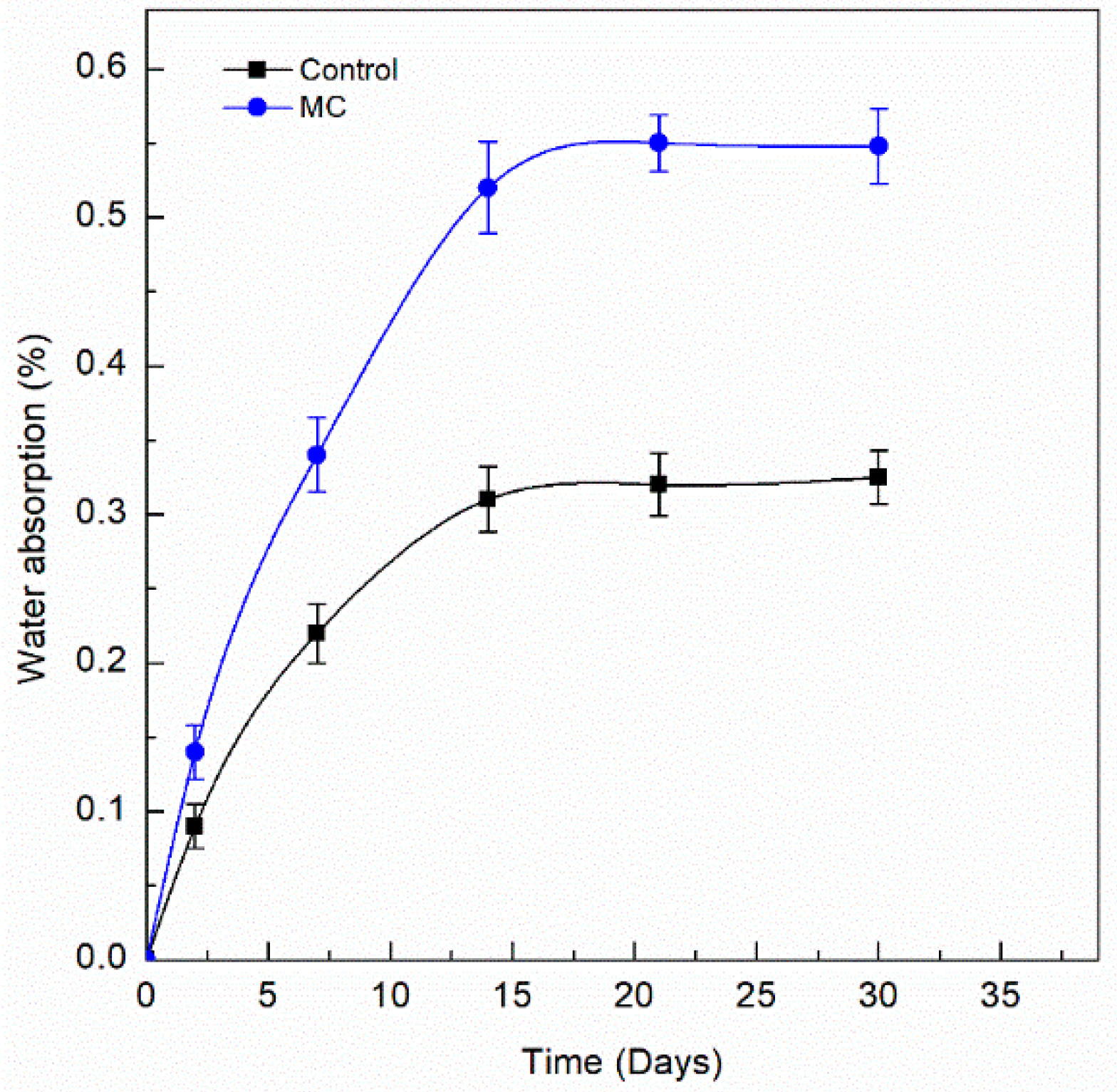 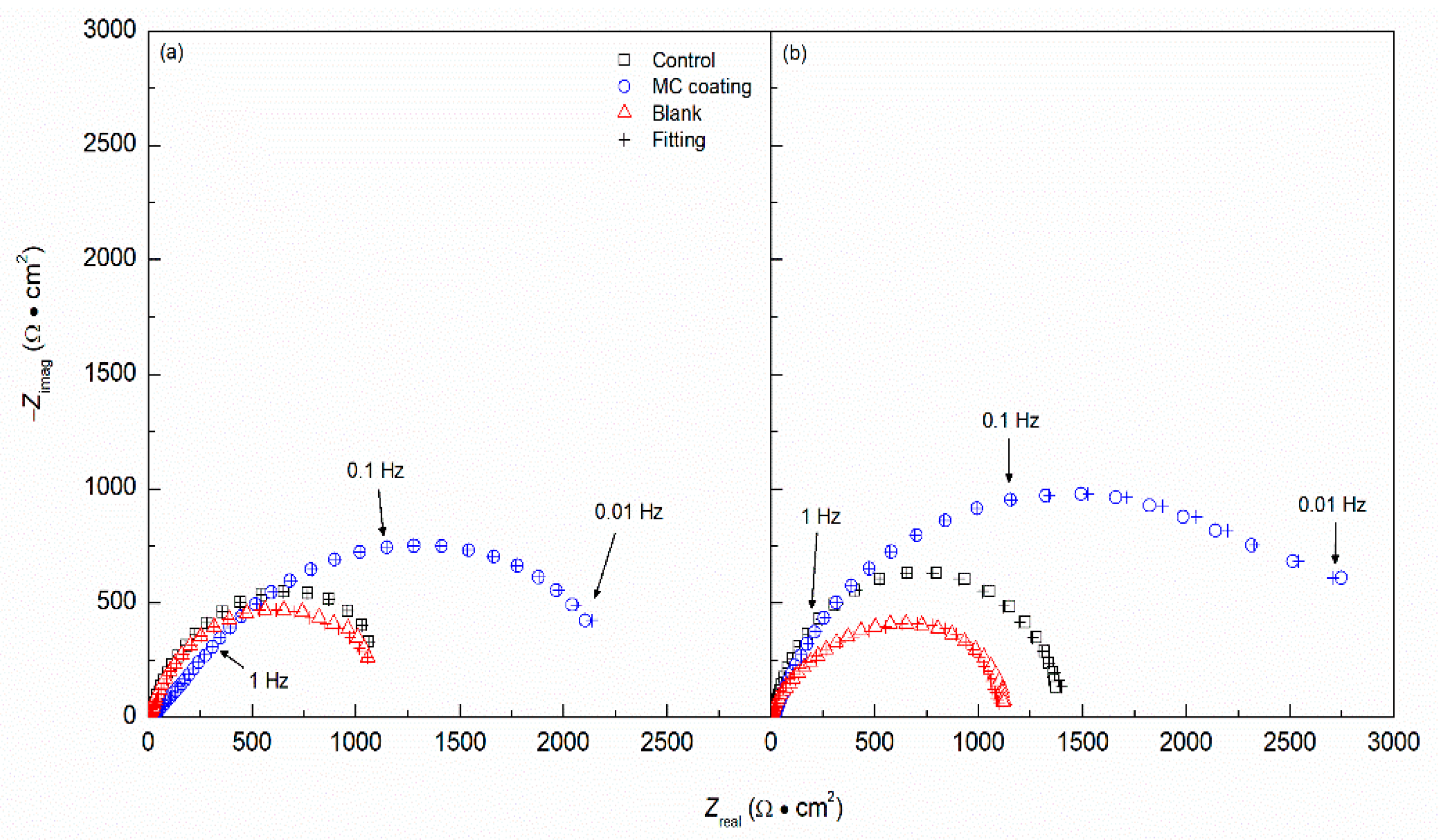