Analysis of Additives in Gypsum Coatings Based on Melamine, Polycarbonate Salts, Polycarboxylate, and Polycarboxylic Acids
Next Article in Special Issue

Diamond-like nanocomposite (DLN) films (a-C:H:Si:O films) are characterized by their unique structure and remarkable tribological properties to be pronounced under various environmental and surface modification conditions. In this paper, we investigated the effects of environments (humid air, water and oil lubrication, elevated temperatures) and laser surface texturing on tribological performance of DLN coatings. Femtosecond laser (wavelength 515 nm) was used for surface texturing. Comparative tests of DLN films sliding against different counterbodies (steel, Si3N4) in humid air and water demonstrated the low-friction and low-wear performance under water, in the absence of chemical interaction of water with the counterbody surface. The wear rates of the film and Si3N4 ball in water, 7.5 × 10−9 and 2.6 × 10−9 mm3/(Nm), were found to be considerably lower than the corresponding values 6.8 × 10−7 and 3.8 × 10−8 mm3/(Nm) in humid air, in spite of higher friction in water-lubricated sliding. Laser surface texturing of DLN films was performed to fabricate microcrater arrays, followed by tribological testing under oil lubrication at different temperatures, from 23 to 100 °C. The lubricated friction performance of laser-textured films was improved at both the room temperature and elevated temperatures. The friction coefficient was reduced from 0.1 (original film) to 0.083 for laser-textured film at room temperature, and then to 0.068 at 100 °C. The nano-/microfriction behavior of laser-structured surface characterized by lower friction forces than the original surface was demonstrated using friction force microscopy in ambient air. The obtained results demonstrate excellent tribological properties of DLN coatings in various environments, which can be further improved by femtosecond-laser-surface texturing. View Full-Text
Keywords: diamond-like nanocomposite (DLN) films; tribology; humid environments; laser surface texturing; oil lubrication; friction force microscopy diamond-like nanocomposite (DLN) films; tribology; humid environments; laser surface texturing; oil lubrication; friction force microscopy
►▼ Show Figures 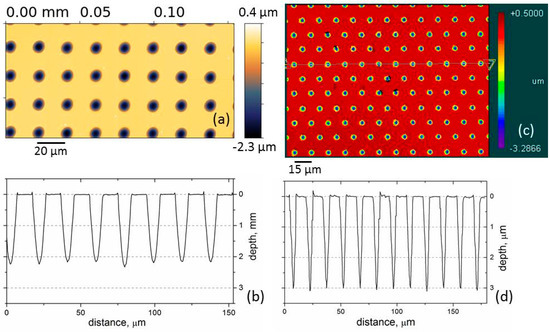