Coatings deposited by physical vapor deposition (PVD) significantly reduce the wear of high pressure die casting tools; however, cast alloy soldering still has a strong negative effect on production efficiency. Although a lot of research has been already done in this field, the fundamental understanding of aluminum alloy soldering toward PVD coatings is still scarce. Therefore, in this work the performance of CrN duplex coatings with different roughness is evaluated by a modified ejection test performed with delayed (DS) and conventional casting solidification (CS). After the ejection tests, sample surfaces and layers were subjected to comprehensive characterizations of their morphological and chemical characteristics. Considerably lower values of the ejection force were recorded in DS experiments than in CS experiments. Surface roughness played an important role in the CS experiments, while samples with different surface topographies in the DS experiments performed in a similar fashion. The decrease in the ejection force, observed in DS tests, is attributed to the formation of a thick Cr–O layer on CrN coating which reduced soldering and sliding friction against thick Al–O casting scale. The Cr–O layer formed in DS experiments suffered from diffusion wear by cast alloy. The observed oxidation phenomena of nitride coatings may be utilized in a design of non-sticking coatings. View Full-Text
Keywords: die casting; aluminum; tool life; soldering; ejection test; CrN; surface roughness; oxidation; diffusion wear die casting; aluminum; tool life; soldering; ejection test; CrN; surface roughness; oxidation; diffusion wear
►▼ Show Figures 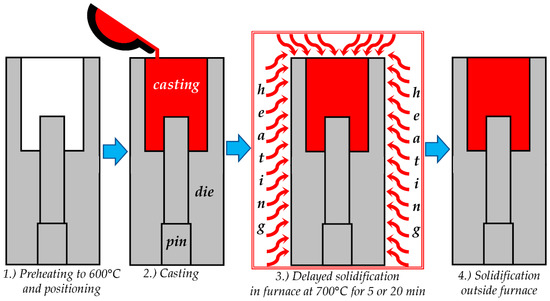