The aim of this study was to develop and implement a methodology composed by a Static Head-Space-Sampler (SHS) coupled to a Sensory Perception System (SPS) for the extraction of Volatile Organic Compounds (VOC’s) emitted by bacterial species in the water. The SPS was performed by means of a chamber of 16 Metal-Oxide-Semiconductor (MOS) gas sensors and a software with pattern recognition methods for the detection and identification of bacteria. At first, the tests were conducted from the sterile and polluted water with the Escherichia coli bacteria and modifying the incubation temperatures (50 °C, 70 °C and 90 °C), with the objective to obtain an optimal temperature for the distinguishing of species. Furthermore, the capacity of the methodology to distinguish the important compounds was assessed, in this case, E. coli and other bacteria like Pseudomonas aeruginosa and Klebsiella oxytoca, which formed similar analytes. The validation of the proposed methodology was done by acquiring water samples from different unitary operations of an aqueduct of the municipality of Toledo (North of Santander, Colombia), which were analyzed by the membrane filter technique in the laboratories of the University of Pamplona, along with the SHS-SPS system. The results showed that it was possible to distinguish polluted water samples in a fast way through the sensory measurement equipment using pattern recognition techniques such as Principal Component Analysis (PCA), Discriminant Function Analysis (DFA) and a probabilistic neural network (PNN), where a 95% of differentiation was obtained through PCA and 100% of the classification with DFA. The PNN network achieved the 86.6% of success rate with the cross-validation technique “leave one out”. View Full-Text
Keywords: electronic nose; E. coli; sensors; quality control; drinking water; pattern recognition electronic nose; E. coli; sensors; quality control; drinking water; pattern recognition
►▼ Show Figures 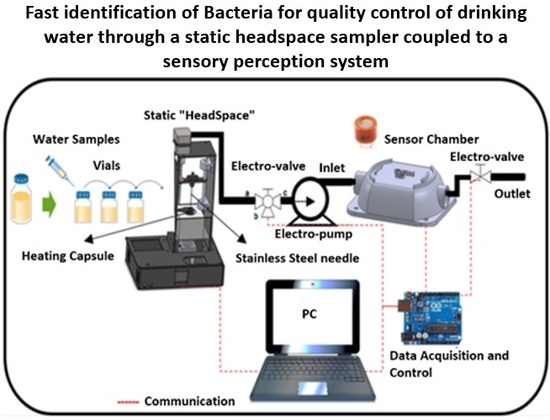