In this report, the photocatalytic activity of P25 has been explored and the influence of thermal treatment under various atmospheres (air, vacuum and hydrogen) were discussed. The samples’ characteristics were disclosed by means of various instruments including X-ray diffraction (XRD), Electron paramagnetic resonance (EPR), X-ray photoelectron spectroscopy (XPS) and UV–vis. This study also accentuates various states of the oxygen vacancy density formed inside the samples as well as the colour turning observed in treated P25 under various atmospheres. Produced coloured TiO2 samples were then exploited for their photocatalytic capability concerning photodegradation of methylene blue (MB) using air mass (AM) 1.5 G solar light irradiation. Our findings revealed that exceptional photocatalytic activity of P25 is related to the thermal treatment. Neither oxygen vacancy formation nor photocatalytic activity enhancement was observed in the air-treated sample. H2-treated samples have shown better photoactivity which even could be further improved by optimizing treatment conditions to achieve the advantages of the positive role of oxygen vacancy (O-vacancy at higher concentration than optimum acts as electron trapping sites). The chemical structure and stability of the samples were also studied. There was no sign of deteriorating of O2-vacancies inside the samples after 6 months. High stability of thermal treated samples in terms of both long and short-term time intervals is another significant feature of the produced photocatalyst. View Full-Text
Keywords: oxygen vacancy; thermal treatment; vacuum; hydrogen; degradation oxygen vacancy; thermal treatment; vacuum; hydrogen; degradation
►▼ Show Figures 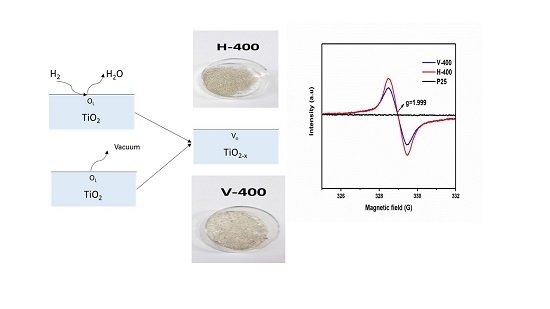