Electrochemical Deposition of Silicon-Carbon Films: A Study on the Nucleation and Growth Mechanism
Previous Article in Journal

Single-phase Ce3+-doped BaTiO3 powders described by the nominal formula Ba1−xCexTi1−x/4O3 with x = 0.005 and 0.05 were synthesized by the acetate variant of the sol-gel method. The structural parameters, particle size, and morphology are strongly dependent on the Ce3+ content. From these powders, dense ceramics were prepared by conventional sintering at 1300 °C for 2 h, as well as by spark plasma sintering at 1050 °C for 2 min. For the conventionally sintered ceramics, the XRD data and the dielectric and hysteresis measurements reveal that at room temperature, the specimen with low cerium content (x = 0.005) was in the ferroelectric state, while the samples with significantly higher Ce3+ concentration (x = 0.05) were found to be in the proximity of the ferroelectric–paraelectric phase transition. The sample with low solute content after spark plasma sintering exhibited insulating behavior, with significantly higher values of relative permittivity and dielectric losses over the entire investigated temperature range relative to the conventionally sintered sample of similar composition. The spark-plasma-sintered Ce-BaTiO3 specimen with high solute content (x = 0.05) showed a fine-grained microstructure and an almost temperature-independent colossal dielectric constant which originated from very high interfacial polarization. View Full-Text
Keywords: sol-gel; Ce3+-doped BaTiO3; dielectric permittivity; ferroelectric–paraelectric phase transition; spark plasma sintering sol-gel; Ce3+-doped BaTiO3; dielectric permittivity; ferroelectric–paraelectric phase transition; spark plasma sintering
►▼ Show Figures 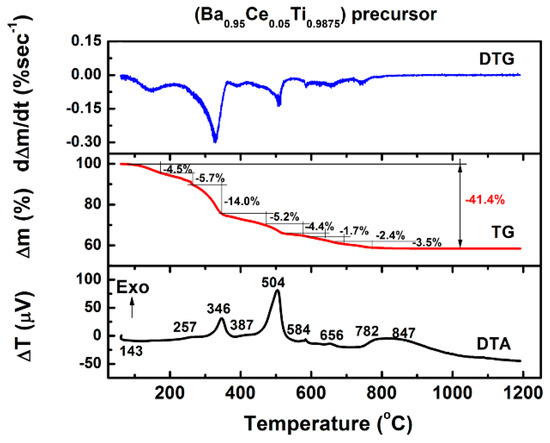