Preparation and Characterization of Graphene Oxide for Pb(II) and Zn(II) Ions Adsorption from Aqueous Solution: Experimental, Thermodynamic and Kinetic Study
Next Article in Special Issue

Engineered nanomaterials (ENMs) based on CeO2 and TiO2 differ in their effects on the unicellular green alga Raphidocelis subcapitata but these effects do not reflect the physicochemical parameters that characterize such materials in water and other test media. To determine whether interactions with algae can predict the ecotoxicity of ENMs, we studied the attachment of model compounds (three subtypes of CeO2 and five subtypes of TiO2) to algal cells by light microscopy and electron microscopy. We correlated our observations with EC50 values determined in growth inhibition assays carried out according to the Organisation for Economic Co-operation and Development (OECD) test guideline 201. Light microscopy revealed distinct patterns of ENM attachment to algal cells according to the type of compound, with stronger interactions leading to greater toxicity. This was confirmed by electron microscopy, which allowed the quantitative assessment of particle attachment. Our results indicate that algal extracellular polymeric substances play an important role in the attachment of ENMs, influencing the formation of agglomerates. The attachment parameters in short-term tests predicted the toxicity of CeO2 and TiO2 ENMs and can be considered as a valuable tool for the identification of sets of similar nanoforms as requested by the European Chemicals Agency in the context of grouping and read-across. View Full-Text
Keywords: nanotoxicology; European Chemicals Agency (ECHA); ecotoxicology; nanoparticles; aggregation; Raphidocelis subcapitata nanotoxicology; European Chemicals Agency (ECHA); ecotoxicology; nanoparticles; aggregation; Raphidocelis subcapitata
►▼ Show Figures 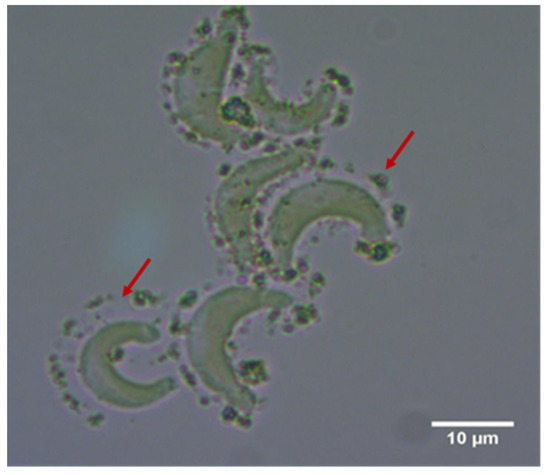