Transition metal carbide nanoparticles are a class of technological interesting materials with a wide range of applications. Among metal carbides, tantalum carbides have good compatibility with the biological environment while molybdenum carbides are used as catalyst in electrochemical reactions. Laser ablation of bulk transition metal targets in some liquids is here reported and laser ablation in organic solvents is used as simple synthetic strategy for the production of carbide nanostructures. Herein, the nanoparticles produced by ultra-short laser ablation of tantalum and molybdenum in water, acetone, ethanol and toluene have been characterized by TEM, XRD and XPS analysis. The combined effect of metal and solvent chemical and physical properties on the composition of the nanomaterials obtained has been pointed out. In particular, the different reactivity of Ta and Mo with respect to oxidizing species determines the composition of particles obtained in water, on the other hand the organic solvents decomposition allows to obtain transition metal carbide (TMC) nanoparticles. The observed carbonaceous shell formed on TMC allows to protect the particle’s carbidic core and to improve and tailor the applications of these nanomaterials. View Full-Text
Keywords: transition metal carbide; ultrashort laser ablation in liquid; solvent degradation; core/shell nanostructures transition metal carbide; ultrashort laser ablation in liquid; solvent degradation; core/shell nanostructures
►▼ Show Figures 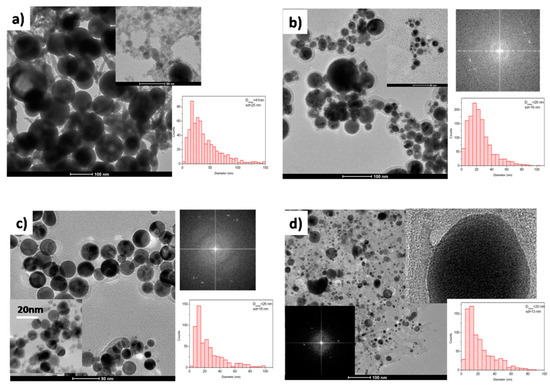