Anonymity and Inhibition in Newspaper Comments

Newspaper comment sections allow readers to voice their opinion on a wide range of topics, provide feedback for journalists and editors and may enable public debate. Comment sections have been criticized as a medium for toxic comments. Such behavior in comment sections has been attributed to the effect of anonymity. Several studies have found a relationship between anonymity and toxic comments, based on laboratory conditions or the comparison of comments from different sites or platforms. The current study uses real-world data sampled from The Washington Post and The New York Times, where anonymous and non-anonymous users comment on the same articles. This sampling strategy decreases the possibility of interfering variables, ensuring that any observed differences between the two groups can be explained by anonymity. A small but significant relationship between anonymity and toxic comments was found, though the effects of both the newspaper and the direction of the comment were stronger. While it is true that non-anonymous commenters write fewer toxic comments, we observed that many of the toxic comments were directed at others than the article or author of the original article. This may indicate a way to restrict toxic comments, while allowing anonymity, by restricting the reference to others, e.g., by enforcing writers to focus on the topic. View Full-Text
Keywords: anonymity; inhibition; disinhibition; incivility; toxic comments anonymity; inhibition; disinhibition; incivility; toxic comments
►▼ Show Figures 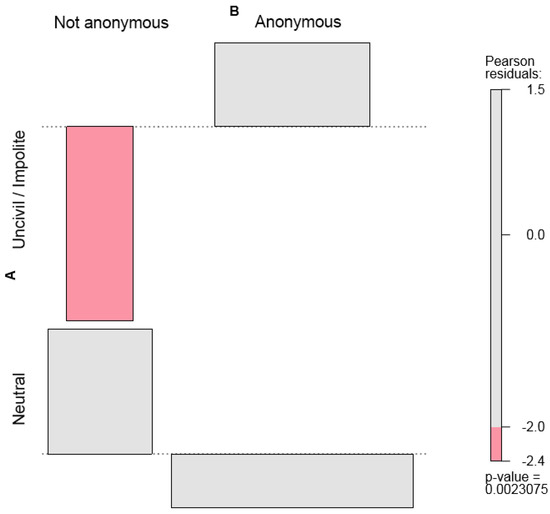