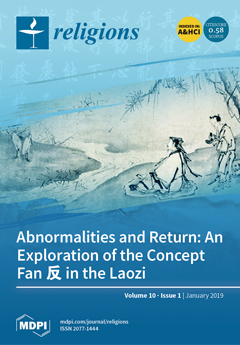 Cover Story (view full-size image): Laozi’s notion of “fan” is mainly used in the sense that things deviate from the correct way—from Dao (“alter, and desires arise”)—and then, through the guidance provided by Dao, they return to their original self (“return to the root”). Since Laozi maintains that the process of change may produce abnormalities and estrangements, things and beings can only regain the rational and normal track through the process of “returning,” which will lead to their development. The notions of “fan,” “fu” (复), and “gui” (归)—which all indicate the process of “returning”—mean that things and beings return to their own “efficacy” (de德) and to their own particular way (dao道). View this paper
Previous Issue
Volume 9, December
Next Issue
Volume 10, February
We use cookies on our website to ensure you get the best experience. Read more about our cookies here.
Accept
We have just recently launched a new version of our website. Help us to further improve by taking part in this short 5 minute survey here. here.
Never show this again