Densely populated coastal regions are vulnerable to extreme wave events, which can cause loss of life and considerable damage to coastal infrastructure and ecological assets. Here, an event-based analysis approach, across multiple sites, has been used to assess the spatial footprint and temporal clustering of extreme storm-wave events around the coast of the United Kingdom (UK). The correlated spatial and temporal characteristics of wave events are often ignored even though they amplify flood consequences. Waves that exceeded the 1 in 1-year return level were analysed from 18 different buoy records and declustered into distinct storm events. In total, 92 extreme wave events are identified for the period from 2002 (when buoys began to record) to mid-2016. The tracks of the storms of these events were also captured. Six main spatial footprints were identified in terms of extreme wave events occurrence along stretches of coastline. The majority of events were observed between November and March, with large inter-annual differences in the number of events per season associated with the West Europe Pressure Anomaly (WEPA). The 2013/14 storm season was an outlier regarding the number of wave events, their temporal clustering and return levels. The presented spatial and temporal analysis framework for extreme wave events can be applied to any coastal region with sufficient observational data and highlights the importance of developing statistical tools to accurately predict such processes. View Full-Text
Keywords: waves; temporal clustering; spatial footprints; coastal vulnerability and impacts; extreme value analysis; risk management waves; temporal clustering; spatial footprints; coastal vulnerability and impacts; extreme value analysis; risk management
►▼ Show Figures 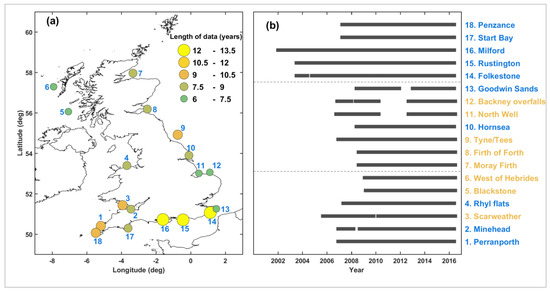