The aim of this study was to analyze the air quality in two different commercially available free-farrowing systems in comparison with a conventional farrowing crate system. A group housing system for six lactating sows (GH) and a single loose-housing system (LH) were tested against systems with farrowing crates (FC) under similar conditions. In eight evaluated batches with 148 farrowings, measurements were performed at the beginning, in the middle, and at the end of the occupancy period of 33 days. The mean dust concentration was significantly higher in GH than in LH and FC at the mid-point. The mean ammonia concentration was significantly higher in GH compared to LH and FC at the beginning of occupancy. The mean concentration of endotoxins was significantly higher in FC than in LH and GH at the end of occupancy. Furthermore, the systems did not differ significantly from each other. Spearman’s analysis revealed correlations between dust and time of occupancy, between ammonia and carbon dioxide, and between ammonia and the inside temperature and outside temperature. The new husbandry systems offer animals more opportunities to move without endangering animal welfare through deteriorated air hygiene. View Full-Text
Keywords: air quality; animal hygiene; dust; ammonia; endotoxins; carbon dioxide air quality; animal hygiene; dust; ammonia; endotoxins; carbon dioxide
►▼ Show Figures 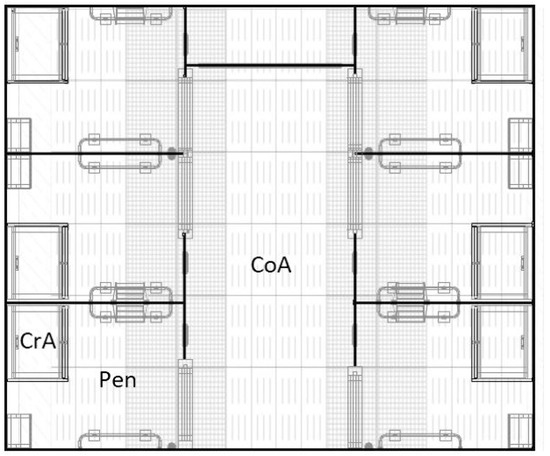