Correlations of the Gastric and Duodenal Microbiota with Histological, Endoscopic, and Symptomatic Gastritis

Mucosal inflammation is characterized by neutrophil and mononuclear cell infiltration. This study aimed to determine the gastric and duodenal microbiota associated with histological, endoscopic, and symptomatic gastritis. Dyspeptic adults who presented for evaluation were included. Subjects with either comorbidities or recent drug intake were excluded. Three endoscopic biopsies were obtained from the antrum, body, and duodenum. Next-generation sequencing for 16S ribosomal RNA V1–V2 hypervariable regions was performed. The correlation between the composition of microbiota and the degree of inflammatory cell infiltration, endoscopic findings, and Patient Assessment of Gastrointestinal Disorders Symptom Severity Index (PAGI-SYM) score was analyzed. In 98 included subjects, microbial communities in the antrum and body showed Bray–Curtis similarity; however, those in the duodenum showed dissimilarity. Histological and endoscopic gastritis was associated with the abundance of Helicobacter pylori and that of commensal bacteria in the stomach. The abundances of Variovorax paradoxus and Porphyromonas gingivalis were correlated with histological gastritis, but not with endoscopic or symptomatic gastritis. The total PAGI-SYM score showed a stronger correlation with the duodenal microbiota (Prevotella nanceiensis and Alloprevotella rava) than with the gastric microbiota (H. pylori, Neisseria elongate, and Corynebacterium segmentosum). Different correlations of the gastric and duodenal microbiota with histological, endoscopic, and symptomatic gastritis were observed for the first time at the species level. H. pylori-negative gastritis is not associated with endoscopic or symptomatic gastritis. Only H. pylori-induced endoscopic gastritis requires gastric cancer surveillance. Owing to the weak correlation with H. pylori, symptomatic gastritis should be assessed separately from histological and endoscopic gastritis. View Full-Text
Keywords: microbiota; inflammation; endoscopy; stomach; duodenum microbiota; inflammation; endoscopy; stomach; duodenum
►▼ Show Figures 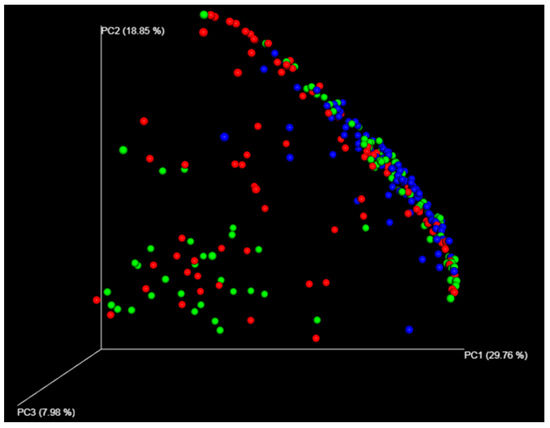