Predicting Long-Term Health-Related Quality of Life after Bariatric Surgery Using a Conventional Neural Network: A Study Based on the Scandinavian Obesity Surgery Registry

Risk of Acute Myocardial Infarction Among New Users of Allopurinol According to Serum Urate Level: A Nested Case-Control Study

Objectives: To test the hypothesis that allopurinol reduces the risk of acute myocardial infarction (AMI) in hyperuricemic patients and to assess whether the effect is dependent on dose, duration and serum uric acid (SUA) level attained after treatment. Methods: Nested case-control study over the period 2002–2015. From a cohort of patients aged 40–99 years old, we identified incident AMI cases and randomly selected five controls per case, matched for exact age, sex and index date. Adjusted odds ratios (AOR) and 95% CI were computed through unconditional logistic regression. Only new users of allopurinol were considered. Results: A total of 4697 AMI cases and 18,919 controls were included. Allopurinol use was associated with a reduced risk of AMI mainly driven by duration of treatment (AOR ≥180 days = 0.71; 95% CI: 0.60–0.84). Among long-term users (≥180 days), the reduced risk was only observed when the SUA level attained was below 7 mg/dL (AOR<6 mg/dL = 0.64; 95% CI: 0.49–0.82; AOR6–7mg/dL = 0.64; 95%CI:0.48-0.84); AOR>7mg/dL = 1.04; 95% CI: 0.75–1.46; p for trend = 0.001). A dose-effect was observed but faded out once adjusted for the SUA level attained. The reduced risk of AMI occurred in both patients with gout and patients with asymptomatic hyperuricemia. Conclusions: The results confirm a cardioprotective effect of allopurinol which is strongly dependent on duration and SUA level attained after treatment. View Full-Text
Keywords: allopurinol; serum uric acid levels; acute myocardial infarction; hyperuricemia; gout allopurinol; serum uric acid levels; acute myocardial infarction; hyperuricemia; gout
►▼ Show Figures 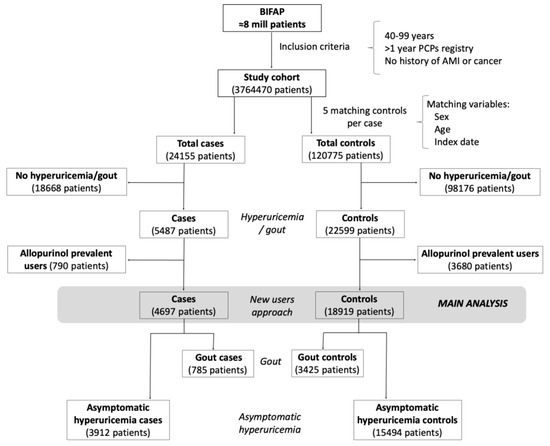