Nasopharyngeal Lymphoma: A 22-Year Review of 35 Cases
Next Article in Special Issue

What Pediatricians Should Know before Studying Gut Microbiota

Analysis of Gut Microbiota and Their Metabolic Potential in Patients with Schizophrenia Treated with Olanzapine: Results from a Six-Week Observational Prospective Cohort Study

Accumulating evidence indicates the potential effect of microbiota on the pathogenesis and course of schizophrenia. However, the effects of olanzapine, second-generation antipsychotics, on gut microbiota have not been investigated in humans. This study aimed to analyze fecal microbiota in schizophrenia patients treated with olanzapine during six weeks of their hospital stay. After a seven-day washout from all psychotropic medications, microbiota compositions were evaluated at baseline and after six weeks of hospitalization using 16S rRNA sequencing. The study was conducted in 20 inpatients, who followed the same hospital routine and received 5–20 mg daily doses of olanzapine. Olanzapine treatment was associated with clinical improvements in all patients and significant increases in body mass index in females, but not changes in gut microbiota compositions and predicted function. The severity of symptoms at the beginning of treatment varied in accordance with the predicted metabolic activity of the bacteria. The present findings indicate that the microbiota of schizophrenia patients is highly individual and has different taxonomical (Type 1, with a predominance of Prevotella, and Type 2 with a higher abundance of Bacteroides, Blautia and Clostridium) and functional clusters, and it does not change following six weeks of olanzapine therapy; in addition, the microbiota is not associated with either the weight gain observed in women or the effectiveness of olanzapine therapy. View Full-Text
Keywords: microbiota; schizophrenia; olanzapine administration; weight gain microbiota; schizophrenia; olanzapine administration; weight gain
►▼ Show Figures 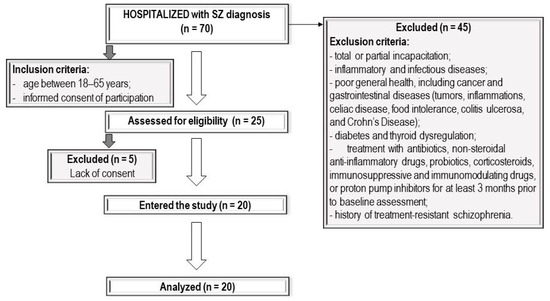