Tangential Flow Filtration for the Concentration of Oncolytic Measles Virus: The Influence of Filter Properties and the Cell Culture Medium

Several types of liquid membrane and solid-state reference electrodes based on different plastics were fabricated. In the membranes studied, equitransferent organic (QB) and inorganic salts (KCl) are dispersed in polyvinyl chloride (PVC), polyurethane (PU), urea-formaldehyde resin (UF), polyvinyl acetate (PVA), as well as remelted KCl in order to show the matrix impact on the reference membranes’ behavior. The comparison of potentiometic performance was made using specially designed standardized testing protocols. A problem in the reference electrode research and literature has been a lack of standardized testing, which leads to difficulties in comparing different types, qualities, and properties of reference electrodes. Herein, several protocols were developed to test the electrodes’ performance with respect to stability over time, pH sensitivity, ionic strength, and various ionic species. All of the prepared reference electrodes performed well in at least some respect and would be suitable for certain applications as described in the text. Most of the reference types, however, demonstrated some weakness that had not been previously highlighted in the literature, due in large part to the lack of exhaustive and/or consistent testing protocols. View Full-Text
Keywords: potentiometry; reference electrode; solid contact; heterogenous membranes; polymer membranes potentiometry; reference electrode; solid contact; heterogenous membranes; polymer membranes
►▼ Show Figures 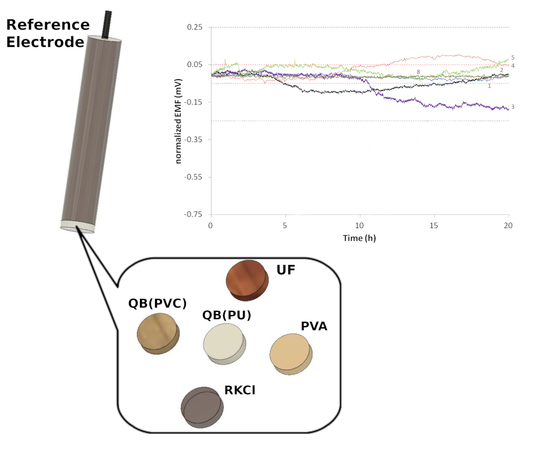