Protection of Polyphenols against Glyco-Oxidative Stress: Involvement of Glyoxalase Pathway
Next Article in Special Issue

Methylmercury-Mediated Oxidative Stress and Activation of the Cellular Protective System

Reactive oxygen species have been involved in the pathogenesis of rheumatoid arthritis (RA). Our goal was to determine the effects of selectively scavenging superoxide (O2•−) and hydroxyl radicals with antioxidant nanoparticles, called poly(ethylene glycol)-functionalized hydrophilic carbon clusters (PEG-HCCs), on the pathogenic functions of fibroblast-like synoviocytes (FLS) from patients with rheumatoid arthritis (RA) and on the progression of an animal model of RA. We used human FLS from patients with RA to determine PEG-HCC internalization and effects on FLS cytotoxicity, invasiveness, proliferation, and production of proteases. We used the pristane-induced arthritis (PIA) rat model of RA to assess the benefits of PEG-HCCs on reducing disease severity. PEG-HCCs were internalized by RA-FLS, reduced their intracellular O2•−, and reduced multiple measures of their pathogenicity in vitro, including proliferation and invasion. In PIA, PEG-HCCs caused a 65% reduction in disease severity, as measured by a standardized scoring system of paw inflammation and caused a significant reduction in bone and tissue damage, and circulating rheumatoid factor. PEG-HCCs did not induce lymphopenia during PIA. Our study demonstrated a role for O2•− and hydroxyl radicals in the pathogenesis of a rat model of RA and showed efficacy of PEG-HCCs in treating a rat model of RA. View Full-Text
Keywords: synovial fibroblast; oxidative stress; nanomaterials synovial fibroblast; oxidative stress; nanomaterials
►▼ Show Figures 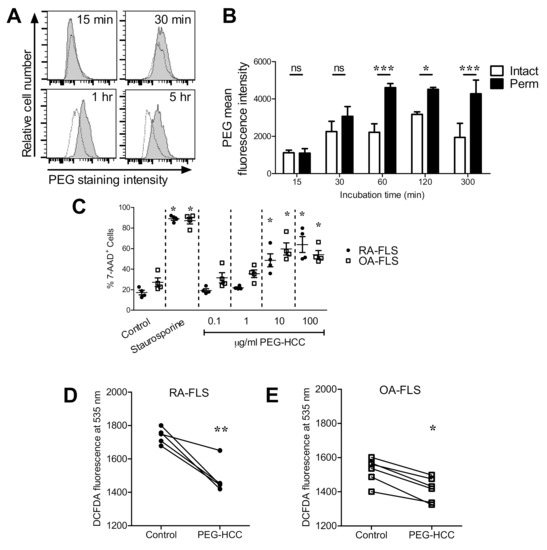