Selenoproteins are essential components of antioxidant defense, redox homeostasis, and cell signaling in mammals, where selenium is found in the form of a rare amino acid, selenocysteine. Selenium, which is often limited both in food intake and cell culture media, is a strong regulator of selenoprotein expression and selenoenzyme activity. Aging is a slow, complex, and multifactorial process, resulting in a gradual and irreversible decline of various functions of the body. Several cellular aspects of organismal aging are recapitulated in the replicative senescence of cultured human diploid fibroblasts, such as embryonic lung fibroblast WI-38 cells. We previously reported that the long-term growth of young WI-38 cells with high (supplemented), moderate (control), or low (depleted) concentrations of selenium in the culture medium impacts their replicative lifespan, due to rapid changes in replicative senescence-associated markers and signaling pathways. In order to gain insight into the molecular link between selenium levels and replicative senescence, in the present work, we have applied a quantitative proteomic approach based on 2-Dimensional Differential in-Gel Electrophoresis (2D-DIGE) to the study of young and presenescent cells grown in selenium-supplemented, control, or depleted media. Applying a restrictive cut-off (spot intensity ±50% and a p value < 0.05) to the 2D-DIGE analyses revealed 81 differentially expressed protein spots, from which 123 proteins of interest were identified by mass spectrometry. We compared the changes in protein abundance for three different conditions: (i) spots varying between young and presenescent cells, (ii) spots varying in response to selenium concentration in young cells, and (iii) spots varying in response to selenium concentration in presenescent cells. Interestingly, a 72% overlap between the impact of senescence and selenium was observed in our proteomic results, demonstrating a strong interplay between selenium, selenoproteins, and replicative senescence. View Full-Text
Keywords: proteomics; 2-Dimensional Differential in-Gel Electrophoresis (2D-DIGE); selenium; protein abundance; selenoprotein; replicative senescence; WI-38 cells proteomics; 2-Dimensional Differential in-Gel Electrophoresis (2D-DIGE); selenium; protein abundance; selenoprotein; replicative senescence; WI-38 cells
►▼ Show Figures 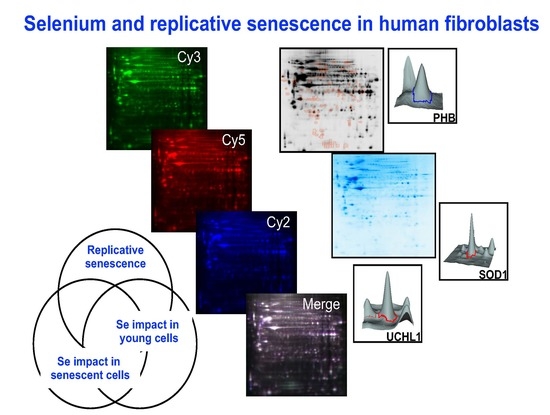