Keeping in Touch with Mental Health: The Orienting Reflex and Behavioral Outcomes from Calatonia

Social touch is important for interpersonal interaction. Gentle touch and slow brushing are typically perceived as pleasant, the degree of pleasantness is linked to the activity of the C-tactile (CT) fibers, a class of unmyelinated nerves in the skin. The inability to experience pleasure in general is called anhedonia, a common phenomenon in the chronic pain condition fibromyalgia. Here, we studied the perception and cortical processing of gentle touch in a well-characterized cohort of fibromyalgia. Patients and controls participated in functional brain imaging while receiving tactile stimuli (brushing) on the forearm. They were asked to provide ratings of pleasantness of the tactile stimulus and ongoing pain. We found high distress, pain catastrophizing, and insomnia, and a low perceived state of health in fibromyalgia. Further, patients rated both slow (CT-optimal) and fast (CT-suboptimal) brushing as less pleasant than healthy participants. While there was no difference in brain activity during touch, patients showed deactivation in the right posterior insula (contralateral to the stimulated arm) during pleasantness rating and activation during pain rating. The opposite pattern was observed in healthy participants. Voxel-based morphometry analysis revealed reduced grey matter density in patients, in the bilateral hippocampus and anterior insula. Our results suggest anhedonia to gentle touch in fibromyalgia with intact early-stage sensory processing but dysfunctional evaluative processing. These findings contribute to our understanding of the mechanisms underlying anhedonia in fibromyalgia. View Full-Text
Keywords: touch; pain; C-tactile afferents; fibromyalgia; anhedonia; fMRI; posterior insula touch; pain; C-tactile afferents; fibromyalgia; anhedonia; fMRI; posterior insula
►▼ Show Figures 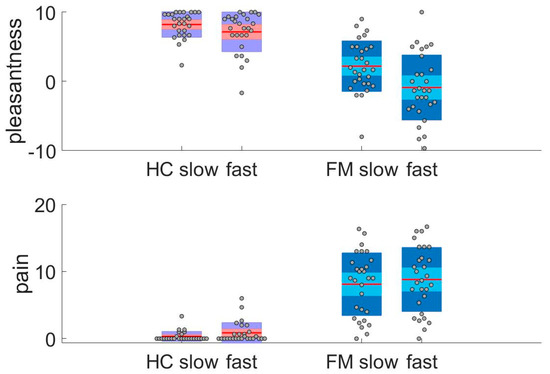