An Integrated FTA-FMEA Model for Risk Analysis of Engineering Systems: A Case Study of Subsea Blowout Preventers
Next Article in Special Issue

Nonlinear acoustic techniques are established tools for the characterization of micro-inhomogeneous materials with higher sensitivity, compared to linear ultrasonic techniques. In particular, the evaluation of material elastic quadratic nonlinearity via the detection of the second harmonic generation by acoustic waves is known to provide an assessment of the state variation of heat treated micro-structured materials. We report on the first application for non-destructive diagnostics of material thermal aging of finite-amplitude longitudinal acoustic pulses generated and detected by lasers. Finite-amplitude longitudinal pulses were launched in aluminum alloy samples by deposited liquid-suspended carbon particles layer irradiated by a nanosecond laser source. An out-of-plane displacement at the epicenter of the opposite sample surface was measured by an interferometer. This laser ultrasonic technique provided an opportunity to study the propagation in aluminum alloys of finite-amplitude acoustic pulses with a strain up to 5 × 10−3. The experiments revealed a signature of the hysteretic quadratic nonlinearity of micro-structured material manifested in an increase of the duration of detected acoustic pulses with an increase of their amplitude. The parameter of the hysteretic quadratic nonlinearity of the aluminum alloy (Al6061) was found to be of the order of 100 and to exhibit more than 50% variations in the process of the alloy thermal aging. By comparing the measured parameter of the hysteretic quadratic nonlinearity in aluminum alloys that were subjected to heat-treatment at 220 °C for different times (0 min, 20 min, 40 min, 1 h, 2 h, 10 h, 100 h, and 1000 h), with measurements of yield strength in same samples, it was established that the extrema in the dependence of the hysteretic nonlinearity and of the yield strength of this alloy on heat treatment time are correlated. This experimental observation provides the background for future research with the application goal of suggested nonlinear laser ultrasonic techniques for non-destructive evaluation of alloys’ strength and rigidity in the process of their heat treatment. View Full-Text
Keywords: laser ultrasonics; nonlinear acoustics; hysteretic acoustic nonlinearity; thermal aging laser ultrasonics; nonlinear acoustics; hysteretic acoustic nonlinearity; thermal aging
►▼ Show Figures 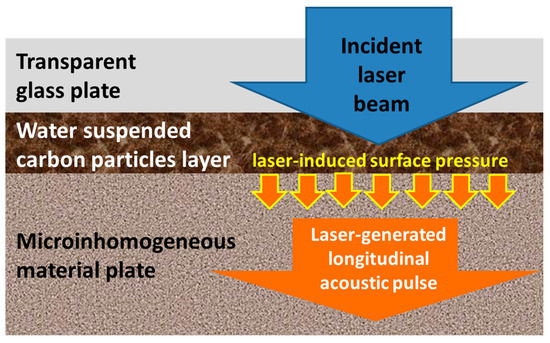