Determining the Effects of Eugenol on the Bond Strength of Resin-Based Restorative Materials to Dentin: A Meta-Analysis of the Literature
Previous Article in Journal

This paper presents the study of the properties of objects that were fabricated with fused deposition modeling technology while using Poly (lactic acid)/Walnut shell powder (PLA/WSP) biocomposite filaments. The WSP was treated while using NaOH followed by silane. The infrared spectrum of treated and untreated WSP was characterized. The result was that thermal and mechanical properties could be improved by adjusting the concentration of silane. The experimental results showed: the surface compatibility between WSP and PLA was dramatically improved through treatment with KH550. The crystalline, thermal gravity, and thermal degradation temperatures of biocomposite with untreated WSP were improved from 1.46%, 60.3 °C, and 239.87 °C to 2.84%, 61.3 °C, and 276.37 °C for the biocomposites with treated WSP, respectively. The tensile, flexural, and compressive strengths of biocomposites were raised each by 8.07%, 14.66%, and 23.32%. With the determined silane concentration, PLA/10–15 wt.% treated WSP biocomposites were processed and tested. The results showed that the tensile strength was improved to 56.2 MPa, which is very near to that of pure PLA. Finally, the porous scaffolds with controllable porosity and pore size were manufactured. View Full-Text
Keywords: fused deposition modeling; biocomposite; poly (lactic acid)-matrix; walnut shell; surface treatment fused deposition modeling; biocomposite; poly (lactic acid)-matrix; walnut shell; surface treatment
►▼ Show Figures 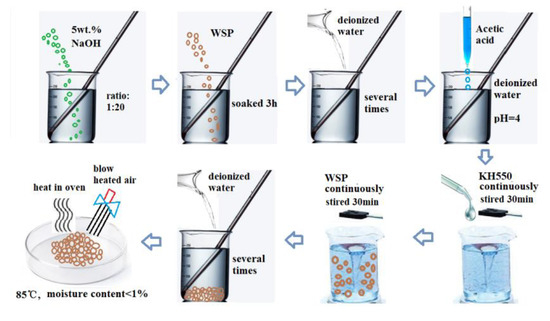