Impacts on Metabolism and Gill Physiology of Darter Species (Etheostoma spp.) That Are Attributed to Wastewater Effluent in the Grand River

:
The effluent from municipal wastewater treatment plants is a major point source of contamination in Canadian waterways. The improvement of effluent quality to reduce contaminants, such as pharmaceuticals and personal care products, before being released into the environment is necessary to reduce the impacts on organisms that live in the river downstream. Here, we aimed to characterize the metabolic and gill physiological responses of rainbow (Etheostoma caeruleum), fantail (Etheostoma flabellare), and greenside (Etheostoma blennioides) darters to the effluent in the Grand River from the recently upgraded Waterloo municipal wastewater treatment plant. The routine metabolism of darters was not affected by effluent exposure, but some species had increased maximum metabolic rates, leading to an increased aerobic scope. The rainbow darter aerobic scope increased by 2.2 times and the fantail darter aerobic scope increased by 2.7 times compared to the reference site. Gill samples from effluent-exposed rainbow darters and greenside darters showed evidence of more pathologies and variations in morphology. These results suggest that darters can metabolically adjust to effluent-contaminated water and may also be adapting to the urban and agricultural inputs. The modification and damage to the gills provide a useful water quality indicator but does not necessarily reflect how well acclimated the species is to the environment due to a lack of evidence of poor fish health.
Keywords:
Etheostoma species; wastewater effluent; field metabolic rate; gill pathology; respirometry; pharmaceuticals

The water quality measurements in the Grand River are recorded in Table 1. The means ± standard error of the mean (SEM) were calculated from three measurements at each site (Table 1 and Table 2, Figure 2). Missing values were due to probe calibration issues on that day. In summer 2019, there was an increase in the values at DS1 when compared to US1, which sometimes continued downstream. In the fall, US2 had changes in conditions when compared to US1 (Table 1). Temperature measurements usually varied daily. In fall 2019, ammonia, nitrite, nitrate, conductivity, and chloride concentrations (see Table 2) increased downstream from the MWWTP with detectable levels of ammonia, i.e., 0.10 mg/L, at both DS1 and DS2 relative to reference sites.

The purpose of these experiments was to investigate the response of darters (rainbow darter, greenside darter, and fantail darter) to Waterloo municipal wastewater treatment plant effluent in the Grand River after upgrading to secondary treatment with an increased solids retention time and nitrification. These upgrades were hypothesized to reduce the biological impacts on fishes downstream, as seen after upgrades to a second municipal wastewater treatment plant in the Waterloo region [12,48]. Rainbow darters had a reduced intersex severity downstream of the Waterloo outfall after the upgrades to the treatment plant [77]. Improving municipal wastewater treatment plants to tertiary treatment to reduce the biological impacts on darters downstream is supported.
This study aimed to characterize the metabolic and gill tissue responses of darters exposed to the improved Waterloo municipal wastewater treatment plant effluent and compare them to fish populations upstream of the outfall. However, rainbow and fantail darters showed an increased maximum metabolic rate, and therefore, an increased aerobic scope. Greenside darters were unaffected. Rainbow and fantail darters’ sizes were unaltered when metabolic adjustments were seen, while the greenside darters were significantly larger and did not alter their aerobic scope, indicating that species-specific differences in metabolic adjustments may be occurring. Overall, there is no clear pattern in the impacts of the municipal wastewater treatment plant effluent or detrimental effects of effluent (i.e., contaminants) due to the variation in the darter’s physiological responses at the various sites. The increased aerobic scope and body measurements indicate that fish living in the urbanized areas of the Grand River may have utilized the greater nutrient (i.e., food) and oxygen availability. Additionally, there were effects of effluent on the gill morphology of darters found in the Grand River. The results were not consistent across seasons, sites, or species, which should be considered in future studies. However, the evidence presented here suggests there were species-specific responses to changing water quality conditions. This study highlights potential effects and markers of contaminant exposure and the importance of looking at multiple species when assessing contaminant effects. 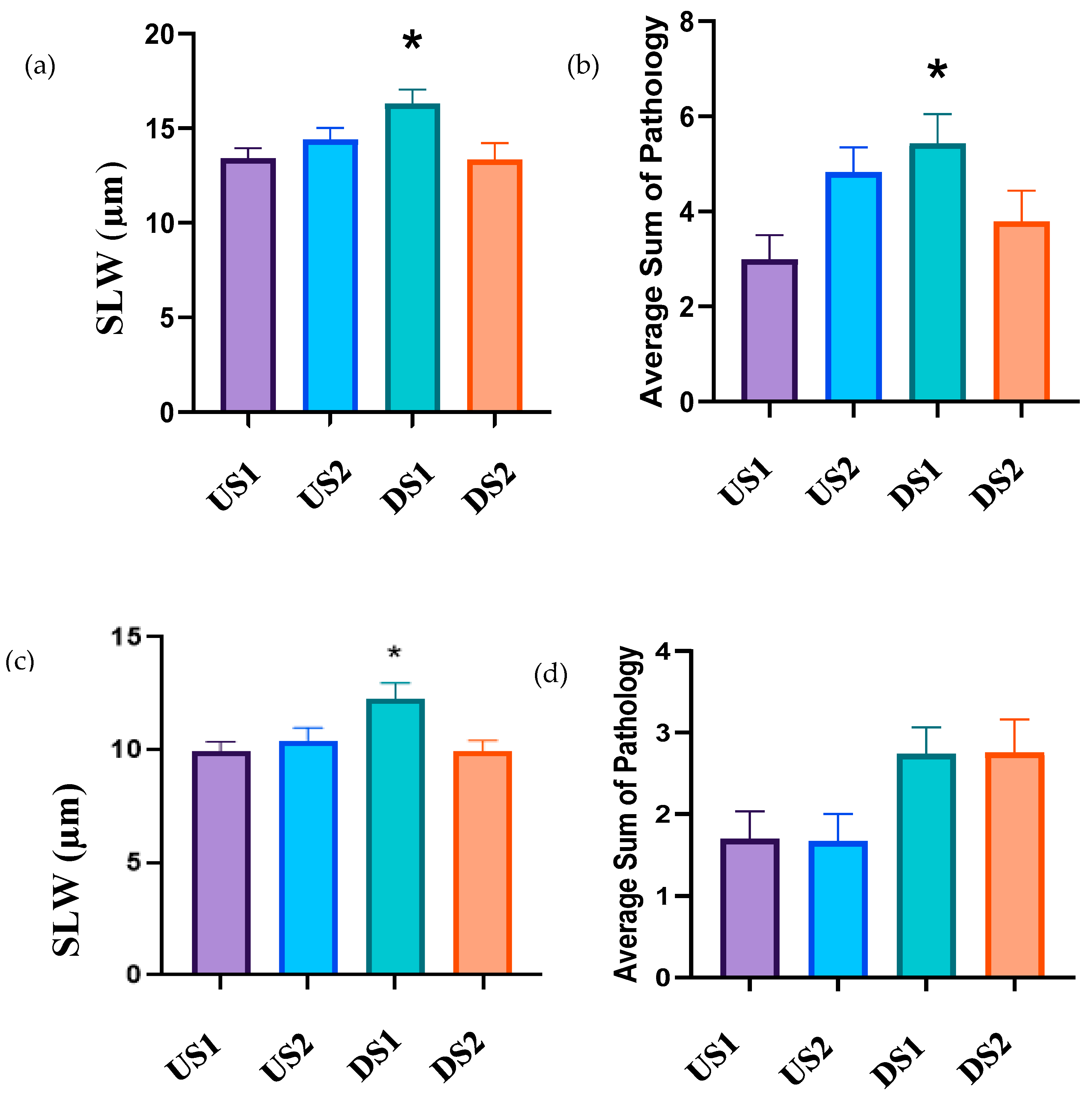 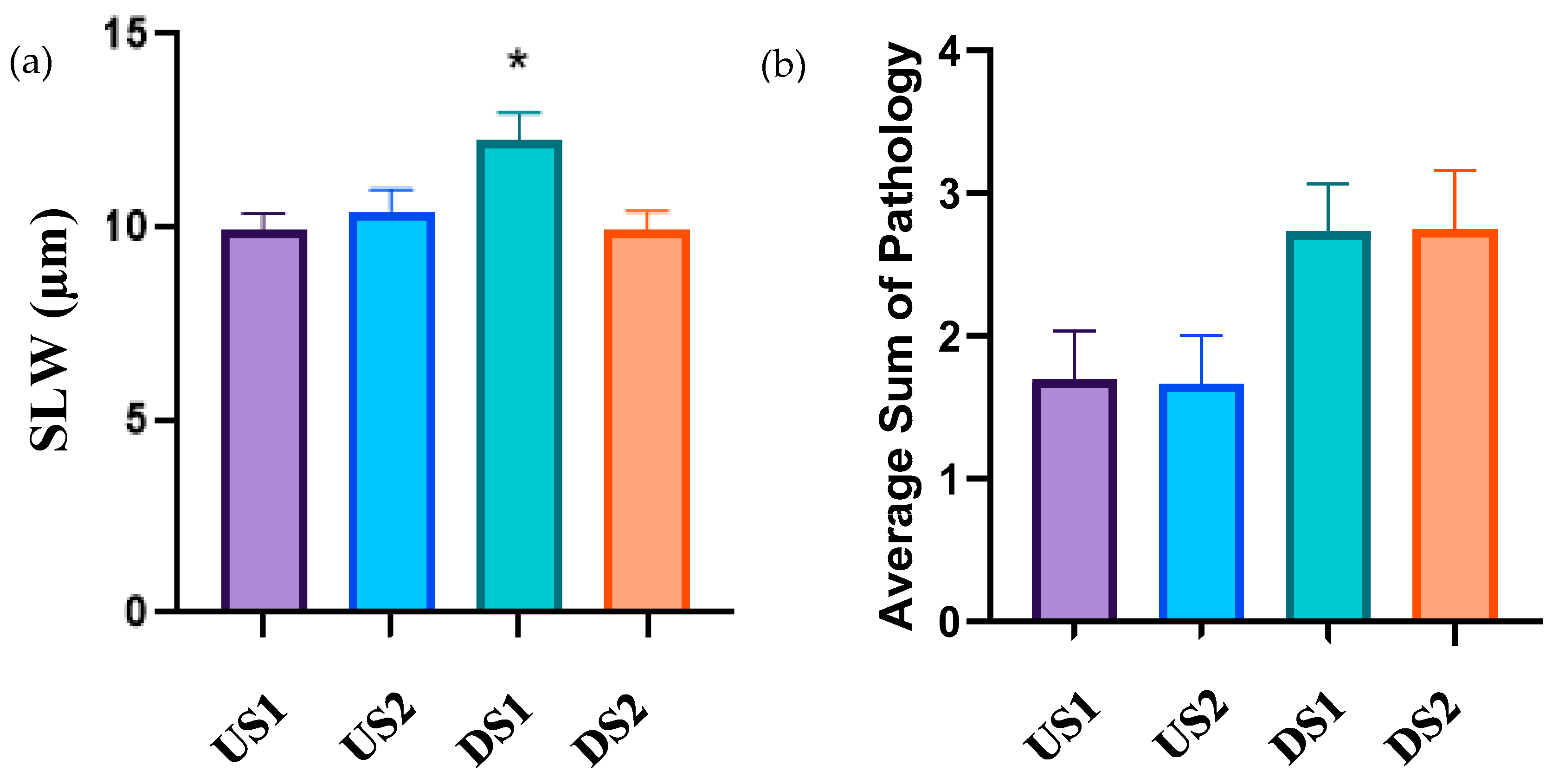