A quite energetic seismic excitation consisting of one main and three additional distinctive earthquake clusters that occurred in the transition area between the Kefalonia Transform Fault Zone (KTFZ) and the continental collision between the Adriatic and Aegean microplates is thoroughly studied after the high-precision aftershocks’ relocation. The activated fault segments are in an area where historical and instrumental data have never claimed the occurrence of a catastrophic (M ≥ 6.0) earthquake. The relocated seismicity initially defines an activated structure extending from the northern segment of the Lefkada branch of KTFZ with the same NNE–SSW orientation and dextral strike slip faulting, and then keeping the same sense of motion, its strike becomes NE–SW and its dip direction NW. This provides unprecedented information on the link between the KTFZ and the collision front and sheds more light on the regional geodynamics. The earthquake catalog, which was especially compiled for this study, starts one year before the occurrence of the Mw5.4 main shock, and adequately provides the proper data source for investigating the temporal variation in the b value, which might be used for discriminating foreshock and aftershock behavior. View Full-Text
Keywords: seismic swarm; relocated aftershocks; transition zone; b value temporal variation; central Ionian Islands (Greece) seismic swarm; relocated aftershocks; transition zone; b value temporal variation; central Ionian Islands (Greece)
►▼ Show Figures 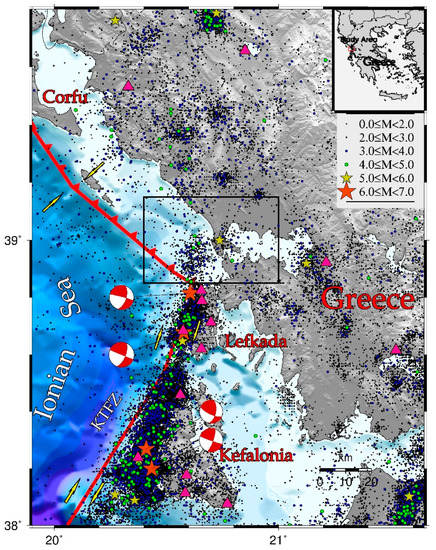