Physicochemical and Bacteriological Analysis of Water Quality in Drought Prone Areas of Pune and Satara Districts of Maharashtra, India

PM2.5 samples were collected from January 2009 to January 2010 at two sampling sites located in the downtown (Centro) and toward the southwest (Miravalle) in the city of Guadalajara, Mexico. The environmental concentrations of 14 selected polycyclic aromatic hydrocarbons (PAHs) in PM2.5 were identified and quantified. The most abundant PAHs in PM2.5 samples were benzo[ghi]perylene, indeno[1,2,3-cd]pyrene, benzo[b]fluoranthene, benzo[a]pyrene and benzo[k]fluoranthene, accounting for approximately 75% of the total PAHs. The total PAH concentrations at the two sampling sites ranged from 0.65 to 19.62 ng·m−3. Spatial variations were found during the dry-warm season, which were attributed mainly to differing intensities of local traffic and less dispersion of air pollutants in Miravalle. Seasonal variations were associated with increases in rainfall (June-September) and differences in temperature (January–May and October–January). The benzo(a)pyrene-equivalent (BaPE) and BaP results suggest that exposure to PM2.5-containing carcinogenic PAHs (C-PAHs) in Miravalle during the warm-dry and cold-dry seasons can be seen as representing a serious risk to human health. The contributions from potential sources to PAHs in PM2.5 were evaluated by the diagnostic ratios between PAHs and principal component analysis (PCA). In the whole sampling period, vehicular emission activity, probably related to light and heavy traffic, was found to be the predominant contributor to PM2.5-bound PAHs. View Full-Text
Keywords: PM2.5; PAHs; source emission; health risks; BaPE PM2.5; PAHs; source emission; health risks; BaPE
►▼ Show Figures 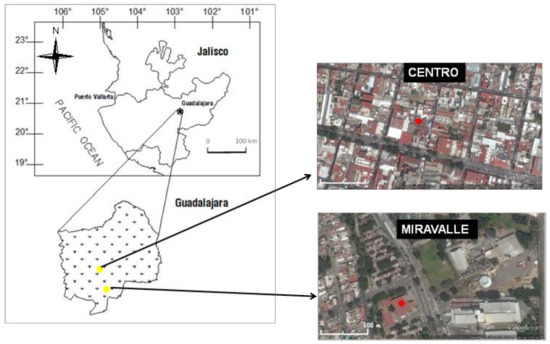