The study of land use/land cover (LULC) has become an increasingly important stage in the development of forest ecosystems strategies. Hence, the main goal of this study was to describe the vegetation change of Azrou Forest in the Middle Atlas, Morocco, between 1987 and 2017. To achieve this, a set of Landsat images, including one Multispectral Scanner (MSS) scene from 1987; one Enhanced Thematic Mapper Plus (ETM+) scene from 2000; two Thematic Mapper (TM) scenes from 1995 and 2011; and one Landsat 8 Operational Land Imager (OLI) scene from 2017; were acquired and processed. Ground-based survey data and the normalized difference vegetation index (NDVI) were used to identify and to improve the discrimination between LULC categories. Then, the maximum likelihood (ML) classification method was applied was applied, in order to produce land cover maps for each year. Three classes were considered by the classification of NDVI value: low-density vegetation; moderate-density vegetation, and high-density vegetation. Our study achieved classification accuracies of 66.8% (1987), 99.9% (1995), 99.8% (2000), 99.9% (2011), and 99.9% (2017). The results from the Landsat-based image analysis show that the area of low-density vegetation was decreased from 27.4% to 2.1% over the past 30 years. While, in 2017, the class of high-density vegetation was increased to 64.6% of the total area of study area. The results of this study show that the total forest cover remained stable. The present study highlights the importance of the image classification algorithms combined with NDVI index for better understanding the changes that have occurred in this forest. Therefore, the findings of this study could assist planners and decision-makers to guide, in a good manner, the sustainable land development of areas with similar backgrounds. View Full-Text
Keywords: maximum likelihood (ML) classification; NDVI; Landsat images; vegetation change; Azrou forest maximum likelihood (ML) classification; NDVI; Landsat images; vegetation change; Azrou forest
►▼ Show Figures 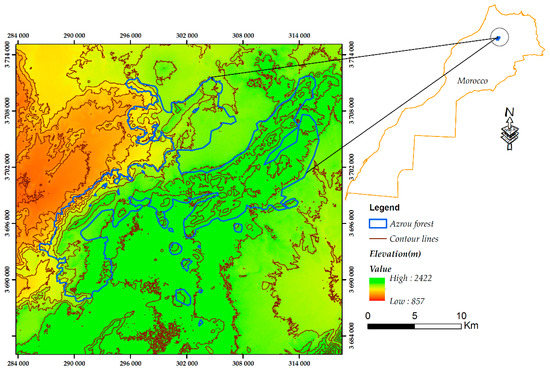